Yesterday, I talked about how accident prone I've been in my life and I just thought I'd share a little of what I've been through.  I think that once you read this, you'll see that I'm not just saying I was accident prone.  I really was.

When I was born, I was circumcised.  They lopped off an inch of foreskin from my penis.  It was traumatic.  I cried and screamed a lot.  I don't remember it but I'm told I did this.  I'm still traumatized even today about it.  All I can think about is, "My penis could be an inch longer."

When I was around three, I liked to run.  I ran so much that an accident was bound to happen.  Once, while I was running like a crazed Forrest Gump, I tripped in the living room and landing forehead first on the edge of a round coffee table.  I had to get stitches.  I still have the scar in the middle of my forehead.  It doesn't hurt any more.

When I was seven, I bumped into a huge fire extinguisher at school and it fell onto my right foot.  It chopped off parts of a few of my toes and deformed them forever.  Two toes don't have toenails and another has one that's a centimeter thick.  Lovely visual huh?  Try cutting it. 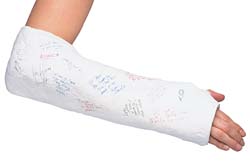 A year later, the same kid I got into my first fight with (Marvin), kneed me in the groin so hard I felt my kids flash before my eyes. I felt like throwing up. Everytime I see this happen on TV or in a movie, I laugh, I fidget, I feel bile in my throat. A woman can never know this pain. Never.

I also almost bit my tongue off around the same time. I was bouncing a basketball and it got away from me and slammed into my open jaw. My tongue was wagging like a fat man at a Chinese buffet. Blood everywhere. It was a long ride to the Emergency Room.

During the same year at the same gym I almost bit my tongue off, my elementary school gym, I broke two fingers. My index and middle finger. I can't remember which hand although I think it's my left. I was playing with two friends and a giant solid oak bench was turned over onto my hand. It bounced. It crushed my fingers as it bounced. I screamed and cried and again, it was a long ride to the Emergency Room.

Not long after learning to ride my bike, I got my foot stuck in it. No, not some clothing stuck in the chain, I literally got my foot stuck between the pedal and the bike. My foot swelled and I couldn't pull it out. The fire department had to come and cut the pedal off with a hacksaw. I kept that one-pedal bike for a long time after that. I kept it till it rusted. It had a bell and a basket and cool purple streamers from the handlebars. It had a banana boat seat, it was cool. It was the seventies.

During Little League years, a friend threw ice at me at the ball field. And according to the rules of childhood, I obviously had to chase him. So I did. Everything was going fine until a giant Dalmatian ran in front of me and I tripped over him. Well, part of me did, the other part was under him. It was diagnosed medically as a hyper-extended knee. A knee bent the opposite way it was designed to bend. The cure was to miss a month's worth of baseball.

I had an impromptu hot dog eating contest with my little sister around this time. I think it started as a dare. I won but only if you go by amount of hot dog eaten, not digested. It got stuck in my throat, halfway down. I looked at my dad, pointed to my throat, opened my mouth, and made scary faces. He yanked me up and performed the Heimlich. The hot dog came back up. It seems that in my haste I'd forgotten to chew the last half. I think that forfeited my win but I'm not a hot dog eating contest expert so what would I know? 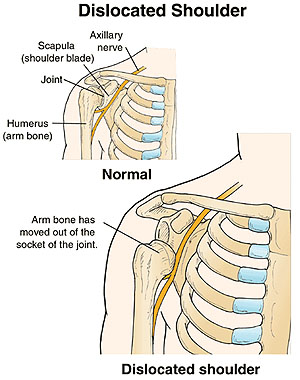 Anatomy of a Dislocated Shoulder.

Seventh grade, I pulled a muscle in gym class while doing soccer drills. I hate soccer, by the way. I kept playing and by the end of class, I couldn't even sit up straight. I could barely put on my shoes and socks after my shower. After lunch that same period, a bully pushed me because I was walking funny. I hate bullies. I went down and couldn't get back up (insert fallen-and-can't-get-up joke here). I stayed in the hospital a week with an aggravated muscle pull. For five straight days, I couldn't move off my back. I understand all constipation commercials on television now.

In eighth grade, I dislocated my shoulder while wrestling in gym class. I didn't know it and kept wrestling. I lost. I hurt. I dragged the arm around with me the rest of the day until finally succumbing to the idea something bad had happened. Since then, I've dislocated it over 25 times. It's fun. The fun part is when I have to go to the Emergency Room to get them to put it back in because it won't go back in by itself any more. I have to have drugs to relax the muscles so the doctor can work it back in. Versed is fun. Morphine is fun. Ginger ale goes well with Versed and Morphine. Versed is a memory drug. You're conscious while they put the arm back in but you don't remember it. Versed is more fun than a pint of vodka mixed with Xanax. If you ever have a choice, go with Versed. 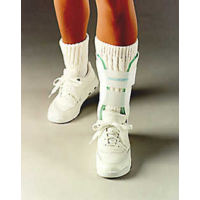 My senior year in high school, this big oaf came under the volleyball net the same time I was casually spiking the ball on his head. I landed on his size 15 foot. My ankle had the funny idea of racing the bottom of my foot to the gym floor. The ankle won. This was the only year I made baseball All-Stars and I missed the first 2 games due to a sprained ankle surrounded by an air cast. I was a power hitter that year (and every year after) and I came into the third game as a pinch hitter with 2 men on. They walked me. I got the last laugh. I didn't walk, I hobbled.

In my sophomore year of college, I had some major backaches. They lasted for half a year and although it hurt differently than my back problems back in middle school, I thought non-action was the best course of action. Unfortunately, after realizing that moving around and never standing still was what my body wanted to do, I thought I may have misdiagnosed the problem. One night, after walking around campus from 8 PM until 6 AM with this back pain, I went to the Emergency Room. I found out I had a kidney stone. I'd had it in me for 6 months. Since then, I've had 6 lithotripsies (sound wave surgery) to break up various stones. I've grown one as big as 18 millimeters in diameter. Yes, that's the size of a shooter marble. A big one. I've passed 103 kidney stones in total, with 2 more still in me. I AM THE MAN. More on this in a later blog.

There are more injuries and accidents, I just can't think of any more right now. I'm not counting the time my sister jabbed me in the leg with a pencil because that wasn't an accident. Or the many many tubes I had in my ears as a child. Or the two auto accidents I had because I didn't get hurt in either one. Bottom line, compare my medical history to yours. Was I accident prone or merely a normal kid? Wait, don't answer that, it was a loaded question.