I Signed With An Agent! 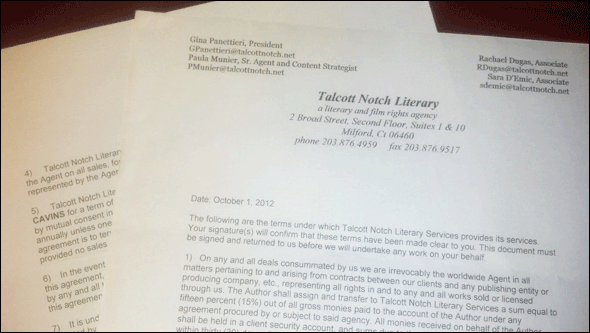 It’s official; I’m signed! Paula Munier of the Talcott Notch Literary has deemed me worthy as a writer and is willing to take a chance on me. This is bigger than you can begin to comprehend.

I know what you’re thinking: So. You have an agent. Have you sold anything yet? No? Have you made any money yet? No? Loser.

Here’s how the publishing industry works. Remember my book, Follow The Money, that five of you have read? I self-published that, because well, I’m good like that.

The book received rave reviews from those that read it. But as an unknown, self-published author, I couldn’t even get my local paper to write a review on it. And the local paper sucks.

Seriously, I’ve seen birds shove it out their cages unscathed.

So what’s the big deal about having an agent?

Having a literary agent automatically gives me legitimacy as an author. Having an agent gets me noticed, because agents are the gatekeepers to the publishing industry. They weed out the chaff from the good stuff so the publishers don’t have to waste their time doing it.

Literary agents work on 100% commission. If they can’t sell anything the author writes, they not only make squat, they’ve also wasted a whole lot of time and maybe even burned a bridge or two with publishers who thought the agent would send them something good.

So an agent doesn’t take on an author unless that author is worth a crap.

And therein lies the peanut butter cheesecake. I’m worth a crap.

Note to self: make a peanut butter cheesecake.

At the end of August, I attended my first writing conference ever: Killer Nashville. I met a slew of writers; some were just beginning, like me, and some had published a dozen or more novels. But at the conference, we were all peers, no matter where we were in our writing careers.

Also at the conference were agents and editors, manning panels and answering questions and generally making themselves available. Before I drove to Nashville, I studied the list of agents. I visited their websites and looked at their agencies. Then I chose a few I thought would make a good fit with me. Number one on that list was Paula Munier.

The magic words that caught my attention were written on her agency bio page: So if you’re a writer as obsessed with words and stories as I am, and you’re in it for the long haul, consider working with me.

That’s basically how I started all my agent queries: I am looking for a long-term, permanent relationship with an agent that can represent all of my writing styles and projects, not just one.

Too many agents are worried about looking for the next Fifty Shades of Twilight, and those aren’t the agents I wanted. I have several distinct writing styles, and I didn’t need an agent that only wanted the “next coolest thing.”

I sought an agent that could also act as a career counselor for the rest of my life, an agent that would guide me through the hurdles and help me write quality books that people wanted to read. 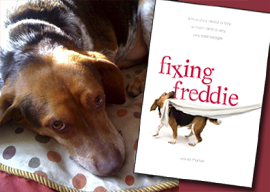 Besides the fact that Paula’s written several books of her own (I loved Fixing Freddie), and worked for such media giants as Gannett and Disney, she’s also worked in the tech world. Remember when Infoseek.com was the bomb? I’m referring to the internet circa 1995.

These guys were THE search engine when Yahoo was but a small list of sites, and Larry and Sergey were still PhD candidates, and their search engine was only a research project on Stanford’s web servers (said search engine is Google).

Infoseek invented CPM advertising (buying ads per 1000 page impressions) and CPC advertising (cost-per-click). They were sold to Disney (the death knell), who merged them with Starwave to create go.com … and the end was near.

The point is, Paula was there for it all as a content manager. Neat.

Paula has not only been on the author’s side of the coin, but more important, she’s worked on the acquisitions side with publishers. She has a keen eye into what will sell and what publishers are looking for. And she knows quality when she sees it.

“I am thrilled to be working with Ross, a great storyteller whose unique voice deserves to be heard.”

Her words, not mine.

Puts all those rejection badges into perspective, huh?

Currently, we’re working on two of my books: Throwing Rocks At Girls (a sports underdog story wrapped around a coming of age story and nestled into a classic love story) and On The Run (the novelization of the first story in Follow The Money, a tale of bumbling kidnappers and their journey to recover the ransom money the kidnapped girl stole from them).

Stay tuned for updates. It’s about to get really exciting.