What I’ve Been Up To Lately

I haven’t done an update in a while, because I’ve been busy with several projects. Besides trying to grow my computer business (anyone need a website?!?!) and working on a new ending for my book On The Run (my agent told me mine was ‘outdated’ and to make it ‘more modern,’ whatever that means), I’ve been working on a book for a friend.

By “working on,” I mean that I edited and published his book. In other words, I helped organize and edit the content, laid out the book block (the insides), designed the cover, set everything up, etc. … you get the picture. 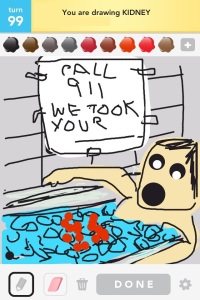 Things Go Wrong For Me a memoir of sorts, a road map of Rodney Lacroix’s haywire life thus far. From his childhood, through the raising of his own kids, to his vasectomy and post-divorce world … this book is more than just a culmination of outrageous stories woven into a cohesive narrative, it’s a testament for the “little guy.”

In this case, literally. Rodney is 5’3″. He’s very little. Almost tiny. Bank tellers offer him lollipops. He makes holiday money wearing green stockings and fake ears. But even though he’s small in stature, his stories and the laughs that accompany them are definitely BIG.

There’s no doubt, if you enjoy snorting milk through your nose, and you’re drinking milk right now … you’re going to love this book.

I’ve included a drawing from his “Draw Something” section. Draw Something is like Pictionary for your smartphone. He draws all his pictures on an Iphone with his tiny little fingers.

Did mention the book is printed in color?

This is a book you all should get. It’s hilarious to the core. Just mosey on over to Amazon and check out the reviews if you don’t believe me. We’re running a special this next week … $2.99 Kindle!

Or you can get an autographed paperback at rcgpublishing.com … and you can order my book and Rodney’s at a discount if you get them together.