Alone In A Movie Theater

You know what’s great about a weekday matinee movie?  Not only is it cheaper but every once in a while, you can get the whole place to yourself.

It’s not much different from being at home.  Except for the gum stuck to the chair.  And the overpriced food.  And the inability to pause for bathroom breaks.  And thirty minutes of previews you can’t fast forward through.

There are some pluses though.  For a well-produced sci-fi movie with lots of special effects, you can’t beat the huge screen and surround sound and the cinematic experience it all provides.  You have to turn off your mobile so no one can bother you and you don’t feel the least bit guilty about doing it.  And sometimes the previews are pretty good but I find lately that more times than not, they’ve gotten out of hand with actual commercials thrown into the mix.  I didn’t pay to see commercials.

As for the over-priced food, I always stop by the dollar store and grab some snacks to sneak in.  If their food wasn’t marked up 300%, I wouldn’t go to the trouble.  Paying a buck for a big box of milk duds is so much more fun than paying $2 for a small box. 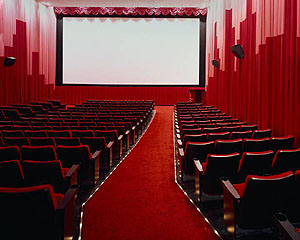 The major negative, however, is that one guy who just won’t shut the fuck up.  He thinks it’s open mic night down at the comedy club and he’ll win if he comments on everything that pops into his mind.  And since his mind’s empty, there’s a lot of space to fill up.

Then there’s the woman with the snort laugh.  She laughs way after everyone else is done and then laughs at sight gags that are only marginally funny.  Sometimes, she gets Coke up her nose and spends a few minutes blowing it out with a loud honking noise.

And let’s not forget the woman with the hypersensitive bladder who paid ten dollars for the three-gallon Diet Coke right before the movie started.  Oh yeah, she sits right in front of you and moves as slow as a geriatric taking her meds.

Speaking of … that reminds me of this one time Wife Number Two and I went to the movies.  It was the Monday Matinee, of course, and we practically had the whole place to ourselves.  In fact, there was only one other couple in there.  We walked in with her leading the way and she picked the two seats in the very center of the theater.  The only problem with that was they were directly in front of the other couple!

Yes, my wife with the double major and two Masters degrees decided we should sit right in front of the only other couple within miles.  This was in a theater that hadn’t been updated to stadium seating yet.  And the lights were still on so there was no viable excuse.  Not too swift, huh?

Usually I’m pretty nice about brain-dead moves because I’ve had my fair share.  But this time it just came out.  I still couldn’t believe what I was seeing as she chose the row in front of theirs.  I was speechless as she kept sidling farther and farther down until finally stopping directly in front of them.  And when she sat in the seat that would block the other woman’s view, my mouth opened.

“Are you kidding?  Of all the empty seats in here, you choose the two right in front of this couple?” I said with a laugh.  I tried to put a comical spin on it but no matter how you put it, it was a pretty humiliating thing to say.  I didn’t mean for it to come out that way but it did.

Her excuse, as she embarrassingly rose, was that she was trying to sit in the very center of the theater for the best sound.  It was a pretty good reason because I’m pretty sure we were going to watch a sci-fi flick and being in the sweet spot of a Dolby system is crucial.

But still, right in front of another couple?

Needless to say, we moved up a few rows and though I can’t remember, I’m fairly certain I didn’t get any for a week.  I probably deserved it.