It disgusts me.  The litter I see on the side of the road.  Potato chip bags, aluminum cans, candy wrappers.  You name it, Americans throw it out their car windows instead of simply dropping it into a trash can.

Not only is it infuriating to me, it's sad.  Down right pathetic.  To think the country that enjoys the highest standard of living the world has ever seen can't take the time to pick up after itself.

It's enough to make a grown man whine on the internet. 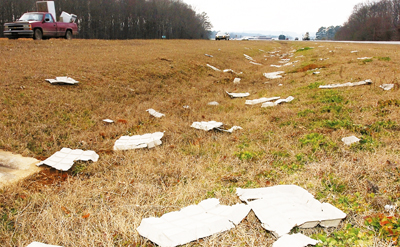 There's this one stoplight near where I used to live.  It's a four lane road separated by a grassy median.  Only you never see the grass for all the discarded cigarette butts.  I'm not kidding.

For years and years, people have been stopping at that light, having a relaxing smoke, and throwing their butts out onto this median.  I don't smoke and I think it's a nasty enough habit without littering it all over Mother Nature.

To me, there's nothing more disgusting than old cigarette butts.

North Carolina has had a Highway Beautification program since 1985.  Our highways and onramps are lined with the most beautiful landscaping of any state I've been through.  Millions and millions of multi-colored wildflowers greet your eyes as you drive through the state.  We've spent an untold amount of money in the program, all coming from the extra fee tacked onto personalized license plates.  And yet we still can't resist the redneck urge to cover it up with fast food bags and recyclable soda bottles.

Is there an answer to the problem?  Besides setting up a platoon of snipers to shoot the tires out of anyone they see littering?  Maybe if we raise the fine from $200 to a night in jail?  Or lop off a pinkie finger?

Why can't the most "civilized" country in the world have civilized citizens?  Europe doesn't have this problem, why do we?

A story someone told me more than twenty years ago has always stuck with me.  Germany used to be the cleanest nation in the world (one plus for a dictatorship) and it wasn't until after WWII that they began to have a littering problem.  But you know where the litter was?  On the road between the US Army base and the airport.

Think about that a while.

America may have brought the world rock-n-roll, ice cream, electricity, Peanut Butter Crunch and computers.  But we also introduced the atomic bomb, Michael Jackson and the concept of littering.  The least we could do is dump it in a hole and cover it up for our children to worry about.