An American in Germany: Day Four (Chilling Out)

Today, we chilled, as per the title. We didn’t wake up until 9 AM, and even then we guzzled several cups of coffee before we even thought about what to do.

Shea and Drew had both gone to work today, so we were without a car. Thus we were reduced to wandering around Schmitshausen, population 400. Around 2 o’clock, after a toasted meat and cheese sandwich, we made the trek to Wallhalben.

This trek included a LONG walk down a dirt and gravel road through a forest area that would have made Hansel and Gretl pee their pants. On the way, we found where Herbie the Lovebug went to die: a small house in Schmitshausen , Germany. After we arrived in Wallhalben, we walked around and took pictures and visited the Wallhalb Market where we bought a few groceries. 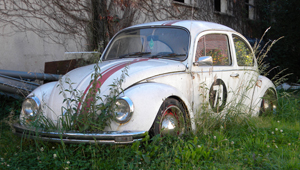 Then came the LOOOOOONG climb up the hill to Schmitshausen. On Google Maps, when you look at the way to get from here to Wallhalben, it looks easy. In actuality, it’s a 35 degree hill, and coming back up is an entirely different experience as going down.

Shea calls it the “son of a bitch.”

Carmen and Judy made a wonderful dinner of rice and lentils and bread while I grilled Mediterranean-rubbed pork chops. There was much wine.

And even though today was very subdued, it was much appreciated. In fact, I’m still drinking wine and we’re about to watch a movie.

The vacationing rolls along …

Tomorrow, Saarbrucken, the city of bridges, and the continuing hunt for my very own German gnome.