Zweibrucken translates to “two bridges,” and is a city about 15 minutes south of Schmitshausen, near the border to France. It’s a small town with some attractions of a larger one.

Specifically, they have one of the largest and most beautiful Rose Gardens I’ve ever seen.  No, really. The website (http://www.europas-rosengarten.de/) claims they have 11 acres of flowers, and I totally think they underestimated. It’s gorgeous.

When we first arrived, we walked around the waterway, and a young German girl approached us excitedly talking and gesturing. I looked at the grandmother hurrying behind her and said with all the apologies I could, “Speak English?”

She didn’t and she told the little girl that, but the girl continued to rattle off German at breakneck speed. We continued down the waterway to a campground, passing a mini-golf, and then headed back.

The girl had passed us to enter the concession building, then raced past us again, still prattling about whatever it was that had her excited.

When the grandfather caught up, he explained the situation to us in broken English. It turns out, there was a duck who’d gotten tangled in a rogue fishing line and was anchored to a chain that spanned the waterway.

Minutes later, the girl’s mother came around the bend manhandling a two-person paddle boat. She changed seats twice in an effort to keep it straight. As she neared the duck, he began quacking and struggled to swim away, but he was snarled in the line. The mother pulled out a pair of scissors and cut him loose.

He sped off and didn’t stop quacking until he was thirty feet away. Exciting stuff.

Our next adventure came at Germany’s largest outlet center, just south of Zweibrucken: The Style Outlets (http://zweibrucken.thestyleoutlets.de/en/). The website claimed there were over 120 outlet stores there so we went. 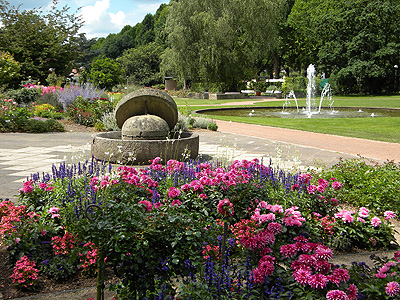 They do indeed have 120 outlet stores, and they’re all the size of a Volkswagen. Catch that German joke?

Not only are the outlet stores small over here, they’re not really outlet stores. In the States, our outlets have prices that are LOWER than department store prices, which is kind of the point of outlet stores. Am I right?

The stores all had signs that claimed they had prices up to 80% off (in German of course). I never saw a thing that was actually 80% off.

And when there was a percentage off, it was usually around 50%, but the problem is, when you charge $149 for a pair of jeans or $64 for a child’s t-shirt, then take 50% of that … it’s not really an outlet store price.

Anyway, we leave tomorrow and I can’t wait. It’s pretty over here, the people are nice, and the food is amazing, but I’m ready to get home.

I miss my computer and smart phone.