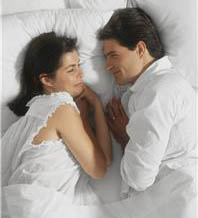 There’s a lot I miss about being married or in a serious relationship.  Cuddling on the couch when we’d watch TV, cooking a grandiose meal for two, taking naughty showers together.  And even providing bed security.

Women know what I’m referring to, it’s something that’s innate in their genetic coding.  I never knew I was providing the service for the girlfriends and wives in my life until one slipped up and let me in on the secret.

Men think we control our relationships, think we have the last say in everything we do, think we notice every little thing that goes on around us (made that last one up).  I thought so, too (not really).  When quizzed, I could name favorite songs, favorite restaurants, favorite movies.  I could recall her eye color, her ring size, her enemy’s name at work.  But one thing I never knew about was that I provided bed security.

Men who don’t know this concept are about to be enlightened, one of women’s greatest secrets will soon be revealed.  Besides that whole roommates-syncing-menstrual-cycles thing, I believe bed security to be the most closely-guarded female secret in the entire world.

Before you say “the left” or “the right,” let me first tell you that I know the answer.  For everyone.  Wife number two revealed it to me when I incorrectly chose after we moved into our house.  My side of the bed, of which I had no say in the decision, was the side nearest the door.

Not the left, nor the right, but whichever side was between her and the threat of impending doom.  The side that allowed me to protect her from any hostile assailant entering our bedroom.  Yes, apparently and unbeknownst to me, my side of the bed was chosen when my Y chromosome developed a penis.