I heard someone talking yesterday about how this pastor and his church owned half a city block and had a membership of more than five thousand people.  By "Big City" standards, that's small but by my little country church standards, it's huge.  Too huge.  It seems to me that big churches have become big business in America.

In Europe, way back in the time before the Knights Templar, the Catholic Church was the only game in town if you weren't Jewish.  It was the epitome of big business, affording special privileges and tax-exempt status from the Kings and Queens of the land. 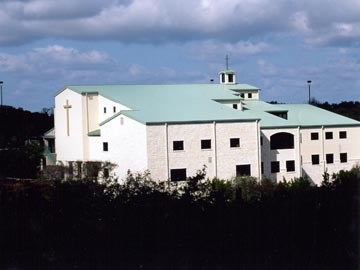 Then came Islam and later Protestantism.  All of a sudden, Europe's population had choices.  The Catholics had to compete, they no longer had a monopoly on religion.

Enter America and the mass dissemination of every flavor of Protestantism.  Add a few we made up along the way (Seventh Day Adventist, Mormonism, Scientology, etc.) and you have the land of choices.  Religion has never loved a form of government more than ours, one that guarantees the freedom to give your money to any religion you so choose.

Big churches are worried more about having two services to handle the volume of participants than having a close-knit community.  Sure they spend a lot of money to print posters and flyers promoting community and youth league sports and fall festivals but it's just not the same as the type of community a small country church creates.

Big churches are all about big business.  That's an opinion I know, but I believe it's a true one.  And to me, big churches defeat the purpose of what the church set out to do in America in the beginning.  Draw together the community into a strong cohesive unit.