Biltmore on a Budget 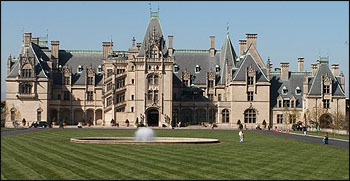 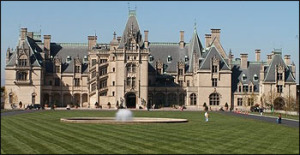 This past week, I took a vacation to Asheville.  I don’t live there yet but I’ve planned on moving there after the New Year.  So I figured that I should at least vacation there since I’ve never actually been.  So, to ring in the New Year, I took off for a week.

On Friday, my traveling companion and I decided to visit Biltmore because neither of us had ever been.

We drove in the gate and parked.  Went in the visitor’s building where you purchased your tickets.  Looked at the prices.  Not bad.

We waited in line and when it was our turn at the clerk (one of six lines I might add), we strolled up happy and somewhat confident.  We might do the audio tour or we might do one of the other ones.  First, my companion asked questions about each tour.

The clerk happily answered each one.  Each tour sounded great and we decided that actually, we didn’t need a tour.  They sold a book all about Biltmore for $12.95.  So we picked up the book and said, “Two admission tickets and this.”  We could do this on our own.

I pulled my wallet out of my pocket as the clerk announced, “One-thirty-one-ninety-five.”

My hands trembled.  My lungs froze.  My brain shut down. 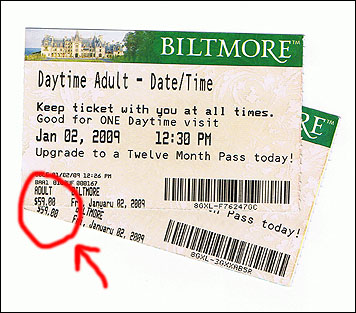 Someone said something.  It might have even been me.  I know I heard something somewhere.

Then as I opened my wallet, I said in a weak voice, “How much was that?”  Surely I hadn’t heard right.

I nodded and smiled and my fingers shook as I extricated a hundred dollar bill and two twenties from my wallet.  I don’t remember handing them to the smiling clerk.  I don’t recall if the clerk was male or female.  I don’t remember much of anything after that until I was in the car driving toward the Biltmore Winery and “free” tasting we were entitled to.

Funny, I didn’t remember seeing any prices for general admission anywhere.  In none of the literature.  On none of the three million signs.  On nothing whatsoever except my receipt.

I guess that’s the first rule of pricing.  If it’s ridiculous, don’t tell anyone until the last minute.

Then the guy’s got no choice or he looks like the cheap bum he is.