Can You Hear Me Now?

Who the hell’s he talking to?

No, this isn’t about a stupid cell phone commercial where a chubby geeky guy walks around saying the stupid catch-phrase into a dummy phone.  (Side note: I had seen three different commercials before I noticed his wannabe beer gut.  You see it?)

This post is about those stupid hearing tests we all took in elementary school.  Remember them?

You put those stethoscope-looking things over your ears while some schmuck behind a glass wall pushed buttons on a machine you couldn’t see.  You were supposed to raise your hand when you heard a sound.

It was usually a high-pitched tone.

This is a good measure of my hearing?

Maybe he should have whispered “You want a Twinkie?” into my headphones.  That would’ve gotten my attention.  Or “You’ve just failed Math” or “Jenny Thompson wants to blow you.”

Okay, the last one would’ve only worked in high school.  In elementary school, I would’ve probably just replied with a “huh?” and they would’ve failed me on that level of hearing. 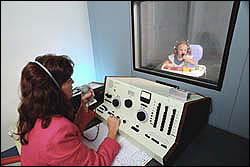 I remember when I took that hearing test that I wanted so bad for them to discover I had super-hearing.  Like I could hear frequencies only dogs and bees could hear.  I pictured the guy hitting the “Impossible to Hear” button and it coming through loud and clear.  I would raise my hand like I’d just heard the school bell, then tell him to turn it down, it’s hurting my ears.  What are you trying to do, make me deaf?

I would be a child prodigy, immediately recruited by the CIA for dangerous spy missions that only someone with my unique talents could accomplish.  I would infiltrate an enemy country, listen for secrets our super-spy satellites couldn’t pick up, then return to save the day.  Have I mentioned I loved The Six Million Dollar Man ?

Meanwhile, I can just hear my mom’s reaction.  “Super-hearing?  My son?  You must be mistaken, he can’t even hear me when I tell him to clean the bathroom.”