I know this seems to be a recurring motif, but in my younger years, I wasn’t too swift.  Oh sure, I had my IQ points and I did well in school, but I was severely lacking in common sense.  There are all sorts of things that I could blame like a late-blooming pubescence or an inferiority complex (and I don’t necessarily discount an idiocy gene somewhere in the mix).  I was fine most of the time and upon first meeting me, I could put on a good show.  It was only after you’d known me for a period of time that one of my “blond” moments would happen.

And then the secret would be out.

Seventh grade English I had Mrs. Tibbals.  She was a crotchety older lady, in her mid-fifties, with a disposition that added another twenty years.  She was wheelchair bound most of the time with thinning grayish pepper hair.  She was not a person who seemed entirely happy with the hand life had dealt her but there was one thing you could definitely say about her – she loved teaching. 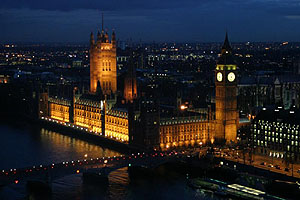 She loved the language so much that each year she organized a class field trip for any of her students interested. This wasn’t an afternoon at the public library or a daytrip to the Natural Science Center. This was the field trip of all field trips, a week-long jaunt to fabulous London, England.

Can you imagine taking a bunch of twelve and thirteen year olds to a place like London? Now, can you imagine those same kids being from a small country school in North Carolina, born with Southern drawls that half our own country couldn’t understand? Most of us had never even been to a large American city like New York or San Francisco, much less a big foreign city. To us, a subway was a chain of sandwich stores. Trains rode on tracks aboveground and carried coal and lumber and had little red cabooses.

The trip was all Mrs. Tibbals talked about. She’d taken her classes the last ten years and each year excited her more and more. Nothing gave her more pleasure than exposing a bunch of little country hicks to the world at-large. There was only one hindrance, the trip would cost over a thousand dollars, which back in the mid 80s, was nothing to sneeze at.

Mrs. Tibbals would have question-and-answer sessions to drum up interest and push our sheltered minds to their limits. She tried to always coax our creativity up to the surface and massage our brains just enough to get the juices flowing.

London is the capital of England. Great Britain is a collective term for the nations of England, Scotland and Wales. The United Kingdom is Great Britain and Northern Ireland. The English Channel separates England from France. England uses pounds instead of dollars. The English love their fish-n-chips and it rains all the time.

There were never a shortage of great questions. It seemed like everyone raised their hands and had something to ask about our British cousins overseas. So I guess it was only a matter of time before peer pressure reared its ugly head and forced my hand up one day.

I’ll never forget this moment till the day I die. And even then, I’m sure Saint Peter will be shaking his head at the pearly gates, saying, “That was you?” It was probably the blondest moment I’ve ever had in my entire life.

I wish I could blame it on some type of asthma-induced dizziness. Or a pre-diabetic coma. Or a heat stroke. Or maybe even a mini-aneurysm. I wish there was a logical reason for my absolute stupidity, but I can think of none. I replay this memory in my mind over and over, grimacing each time, but I always come to the same conclusion. I just wasn’t thinking.

“What language do they speak?”

That was my unforgivable crime. I sat there, in the middle of this English class, surrounded by raucous laughter and finger-pointing as I slowly understood what I had asked. This little country boy had been so wrapped up in learning about a foreign land with its foreign ways, that he’d completely skipped over the fact it was England. The birthplace of the English language.

Did I mention this English class was for “gifted and talented” students? Yeah, that’s right, it was the smart-people English class. Kinda puts a whole new spin on it doesn’t it?

My memory doesn’t allow for an answer from Mrs. Tibbals. I can only remember the other kids in the classroom as they snickered and shared knowing looks over my humiliation. I do recall actually shrinking in my desk. And my face warming to about a hundred eighty.

Fittingly enough, this was the first year that Mrs. Tibbals didn’t have enough students interested in the trip to make it happen. After ten straight years of taking her classes to London, ours disappointed her. And I think I’m to blame. I may have inadvertently, through my extremely blond moment, taken the mystery and intrigue out of the once-exciting trip.