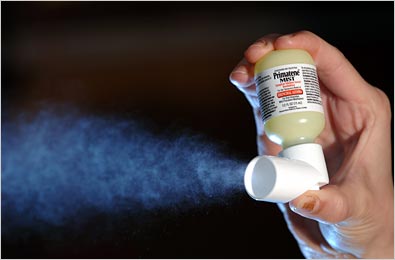 Growing up, I had what I affectionately called “Fat Boy Asthma.”  Whenever I would play sports, I had trouble breathing.  I never experienced an attack for no reason like most asthma sufferers, it only happened when I exerted myself.  In fact, that’s what the doctor’s called it, over-exertion asthma .

I was chubby during those years before puberty.  Of course, now, after puberty we all call it something different.  Big-boned.  Because our bones have grown, right?  Actually, my bones aren’t bigger than other people’s, just the cushioning on them is.

The descriptor “chubby” was killed sometime during the Political Correctness Movement of the 80s and 90s.  The blander, more vanilla terms of “overweight” and “weight-challenged” took its place.  “Obese” even came into play but that was reserved for your overly chubby people.  We just called them “fat” back then. 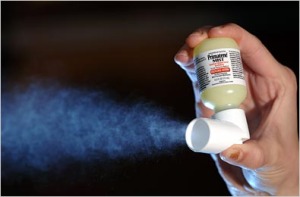 Whenever my gym class ran cross-country, I was the kid with the Primatene Mist inhaler clutched in one hand.  I always had to walk part of the way, I couldn’t run the entire course.  When I stopped to walk, I’d raise the inhaler and give it a good squirt.  The mist would shoot into my lungs as I took a deep breath, clearing passages like it was human-friendly hydrochloric acid.  That stuff was liquid gold.

Sometimes in the winter months, I’d be playing basketball with the guys and have to stop to drink some hot water.  Literally.  I’d go inside, run hot tap water in a glass, then drink it down slowly.  I later discovered how asthma victims would go in the bathroom, turn the shower on real hot, and inhale the heated mist.  Well, so you know, hot water works too.

My Fat Boy Asthma disappeared some time during adolescence, replaced by just plain being out of shape.  But not at first, it happened slowly.  Over time I didn’t bother to bring my inhaler when I played sports.  In high school, I could run half-court for thirty minutes and have to stop for a breather.  But in college, I could run full court for three hours, then go in and work my labor-type job from 8 to midnight.  Not only did I finally get into shape, but the asthma had disappeared.

So to all of you out there with Fat Boy Asthma, or with kids that have it, know that it can get better.  With adolescence, not only will it disappear, but it disappears just in time to get dates.  Because as we all can agree, it’s hard to look cool clutching an inhaler while your face squirms to suck in breaths.  Oh, one more thing, and remember this; the asthma may recede, but the fat will stay.