If The Shoe Fits …

Back in high school, I worked in the shoe department at Sears in the mall.  I started the summer before in Personnel but when school came around, I moved out to the sales floor.  Into the shoe department.  I was Al Bundy before the show ever existed.

This was all back in the time when Sears had those Super Saturday sales, they'd run giant flyers in the newspaper with scratch-off sections and you had to bring the flyer to the store before you scratched it off.  Underneath could be an extra ten to fifty percent off our already low sales prices. (Sorry, that jargon stuck with me)

We just happened to have a Super Saturday sale my first week on the floor.  This was not a good thing.  You see, an associate almost needed a specialized degree to run the register at a Sears back then.  There were no barcode scanners and here I was fresh out of register training, thrown into the busiest single sale day a Sears associate could experience. 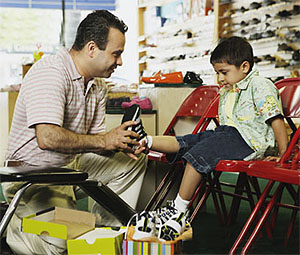 Trying On A Shoe

I remember it so vividly.  By noon I had retrieved several hundred pairs of shoes from the stockroom, and returned more than half because either they didn't fit or the customer changed their mind.  I was frazzled, a young kid of sixteen with an I'm-In-Training badge and an innocent view of the world.

That would change before the sun went down.

Sometime late that afternoon, when the other associates had gone home or on break, I was alone in the shoe department.  My hectic initiation had made me a practical whiz on the register.  I was comfortable in my job and knew everything there was to know about shoes.  The regular width for a man's shoe was size D, a woman's was size B.  I learned to distinguish between taupe and tan and beige.  I was even beginning to learn some of the stock numbers by heart.  I was feeling pretty good about myself.

Then they came in.

"They" were a young mother and her five year old son.  He was small and cute and really excited, his childlike anticipation bubbling up like a fountain at the World's Fair.  He was starting big-boy school the next week and they were shopping for his back-to-school items.  Luckily for me, he needed shoes.

Just that morning I had a patient customer teach me how to use that metal shoe sizer thingee.  Amazingly, it had been omitted from my extensive training regimen.  The mother and her son picked out a pair of shoes and sat down in the orange padded chairs, waiting for me to do my thing.  Back then, we still occasionally helped the customer try on their new shoes and my customer service training kicked in.  I walked over to them, smiling, asking if I could help them.

The boy was so little that his feet barely hung off the edge of the chair.  They pigeon-toed slightly and he looked up at me with soft brown eyes as big as a doe's.  He was so precious I could have just squeezed him and put him in my pocket.  "We need you to size his feet," the mother said with a beaming smile.

I ran to the register and returned with the ACME industrial foot sizer.  I removed his left shoe and held the sizer up to his foot.  A perfect little boy's size eleven.  I memorized the stock number on the display shoe he clutched in his tiny fingers and left to find his shoes.

I returned minutes later with a shoe box and he instantly blazed a smile as wide and toothy as any I'd ever seen.  I hadn't realized until that very moment that today marked a major milestone in his life.  This single purchase of Sesame Street shoes signified his ascension into big-boyhood.  He belonged to the club now.  He was one of the guys.  Today was his first step in the long unsteady walk to manhood.

I set the box down on the floor and pulled out the left shoe.  It was already tied, this was going to be a perfect experience for him, nothing could ruin it now.  Nothing except a sixteen year old Sears associate in training.

I slid the shoe onto his foot and carefully fit it around his heel.  Or rather, I tried.  It wouldn't go on.  My first thought was that I had grabbed the wrong size but a quick glance down at the box nixed that.  Then I thought that maybe the shoe was a smaller one stuck in the box by accident.  I took the shoe off and looked at the tag on the tongue.  Size eleven.  Had the ACME foot sizer failed me?  No, I'd double-checked myself earlier.  He was definitely a size eleven.

I loosened the shoe strings and tried the shoe again.  I had the same problem, it just wouldn't slide over the heel.  I was at my wit's end, having tried everything the Sears training had prepared me for.  I was still shoving the shoe onto his foot when the boy said, "There's something in it."

Those simple words reminded me of something every shoe buyer in the world knows about.  It's one of the first aspects of shoe-buying we learn, right up there with the do-not-eat silica packets in every box.  You're thinking of it right now without me having to even say it.

I pulled the shoe off the poor kid's foot, allowing his itty bitty toes a chance to straighten back out.  I apologized profusely as I reached in and yanked out the wad of crumpled tissue paper Reebok had stuffed in to keep the end from collapsing.

That was when this innocent little child of five, speaking in a shrill Southern twang, looked me right in the eyes and said with all the sincerity he could muster, "You're stupid ain't you?"

My jaw fell open, my face flushed with heat, and my mind blanked.  His mother's eyes widened and she gasped in horror, immediately diving into a hasty apology.  She even made it a point to acknowledge my training badge to her son, like that mattered to him.  I couldn't blame the little guy, he'd called it like he'd seen it.

Bill Cosby used to have a show called "Kids Say the Darnedest Things," because kids view the world in a way that we've forgotten how.  They haven't learned to build social constructs around situations.  They don't know to tell little white lies to spare someone's feelings.  Kids don't say the darnedest things, they say the unabashed truth as they see it.

On this fateful Super Saturday in my life, at a time when I was beginning to believe that I knew it all, it took a five year old child to set me straight.  He showed me that no matter how comfortable or confident I was that I had it all figured out, I never would.  Life would never show me all the answers and I would never know everything, no matter how hard I trained or how much I studied.

There's an old saying that goes, "When you know that you don't know, and that you never will, then you know."  Or maybe I made that up.  The point is to accept the fact that you'll never know it all.

And now you know.