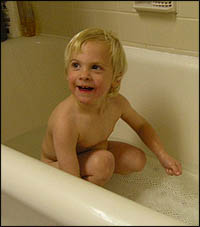 I learned something this past weekend that disturbs me.  My four year old nephew Joey has a big schlong.  It’s so big that it gets talked about.  The boy is set for life.

I didn’t learn this by giving him a bath or anything.  I learned it from my mom.

The other day, she gave his six year old brother a bath.  He was sitting on a tub chair and the water lapped just above his privates.  He yelled for my mom to look!  “Look!  My weenie’s floating!”

My mom laughed and said something like, “Good, good.  Now turn around and let me get behind your ears.”

In itself, that was funny.  I could end there.  But there was more.

He looked at my mom and said, “If this was Joey, his weenie would be touching the chair.”

Let that sink in a moment.  When a six year old boy regards his four year old brother’s penis as large, it’s probably not an exaggeration.

Mom laughed as she told me this, eyes glistening and cheeks rosy.  I questioned her if this was really so, did my nephew in fact have a big winkie?  She said yes, that when the boy was born, my sister thought something was wrong.  She called my mom in and pointed at it, saying, “I think something’s wrong.  Look at it.  It’s huge.”

With a straight face, my mom told her, “He takes after my side of the family.”

In case you’re wondering, I didn’t get those mutant genetics.

Ten years from now, when Joey is beginning to think about girls, I’ll hopefully be an accomplished writer and novelist.  I can see it now.  Joey will want to brag on his uncle.  He’ll take one of my books to school, a collection of entertaining blogs, and give it to a girl he likes.