I finally watched the final intallment in the Rocky movie series, Rocky Balboa .  At first I hesitated because how good can the sixth of a tired-out movie series be?  But then I read that Sylvester Stallone wrote this one and that he wanted the characters to go out on  his own terms.  That sold me.

Why?  Because, I know something few people realize.  Sylvester Stallone wrote the original Rocky motion picture screenplay himself.  And not only was it his first major manuscript, he wouldn't sell it to any producer without a clause that he played the lead role.  He wrote the movie for himself and in many ways, his life paralleled the movie's theme. 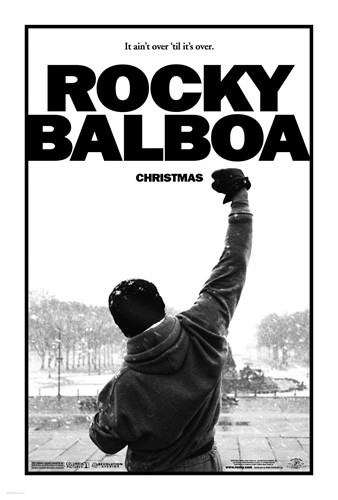 At the time Sylvester was trying to sell his movie, he was starving and had a bank balance of barely a $100.  But he knew he had a winner and the fighter inside him wouldn't let him give up.  He wanted to break into acting and this was his big chance.  And given that he'd already auditioned for most the casting agents in New York and Los Angeles, he knew Rocky may be his only chance.

Right or wrong about that assumption, we'll never know.  But we do know he was right about Rocky being a winner.  It took home three Oscars in 1977, another 15 awards and 19 more film nominations.  Not only did Rocky make Stallone a millionaire, it made him a household name.

From the depths of poverty, Stallone and Balboa each rose to the top of their worlds.  Sylvester would go on to write numerous more films while Rocky continued to survive all odds.  While not masterpieces of film, he has written twenty other screenplays that have been made into motion pictures.  Included in these are the classic Rambo series, Staying Alive with John Travolta, and Cliffhanger .

Rocky Balboa was Stallone's final farewell to the Rocky character.  He wrote and directed the film and has, in his own words, called it the last installment.  He took Rocky out with a split decision loss, but he took him out with class and dignity.  It was a great film whose message is timeless, to never give up and never give out.  I salute Sylvester Stallone for following his dream and achieving it against almost impossible odds.

As a side note, I noticed that he's written and directed another film coming out soon, John Rambo .  Hmmm …