Second grade.  His name was Marvin.  He was in first grade but he was my age.  He either failed or was held back or started late.  And no, I don't remember who won.

Actually, Marvin wasn't my first fight.  I've got studio-made pictures from pre-school of me sporting a blond bowl cut and a bloody nose.  Obviously there was a fight involved but I don't remember it.  So it doesn't count.

The fight with Marvin I halfway remember.  It happened on the playground during recess and neither of us suffered any scrapes or bruises.  After she broke it up, Mrs. Mims sent us to the principal's office.  Nowadays, that's no big deal but back then it was super scary.  This was when spanking with a paddle was not only condoned, it was highly endorsed. 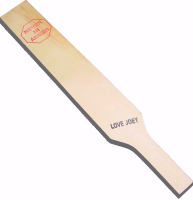 Marvin and I started off to Mr. Feeney's office with visions of his huge paddle dancing in our little heads.  It was made of ash wood and had holes in it, the damned thing was aerodynamic!  It was even rumored that he had a second paddle with tacks protruding from one end, for the really bad kids.

As we walked through the empty school halls toward our impending doom, we talked about the fight.  We eventually decided our disagreement was petty and therefore solved.  There was no reason to go to Mr. Feeney's office after all!  Elated at our revelation and only steps away from the principal's door and a certain ass-whipping, we turned and headed back to class, friends out of necessity.  When we entered the classroom, Mrs. Mims asked what happened.  We told her the truth, that we'd settled our differences and no longer needed to visit the principal's office.

She actually bought it, probably too stunned by our boldness to reissue the command.  It had worked!  At seven years of age, I was able to plead my case to an adult and be convincing enough to win.  And I did it without begging or whining.  I did it through logic.  Marvin and I no longer had a problem, so there was no need for the principal to work it out for us.

Now that I think back on it, this may have been the first step toward me becoming a man.  I've always tackled problems logically, which sheds even more light on my degree in Computer Science.  And more importantly, why I still haven't figured out women and never will.

If you're wondering, I did have plenty of opportunities to visit Mr. Feeny's office in later years.  Did I mention how big of a man he was?