I love painted fingernails on a woman.  Simply put.  There's just something about it that gives a woman that something extra special.  It makes her more feminine, surrounds her with an aura of sexiness.  But it doesn't necessarily make her a girly-girl to have them painted.

I've seen plenty of tomboys with their fingernails painted, they have the ability to play whatever role is needed for the right moment.  For instance, if she's going backpacking, she may paint on a nice forest green or a hard maroon-like color.  A night on the town?  Maybe a french manicure, the kind that has the white outer part with a glossy sheen.  Va-va-voom! 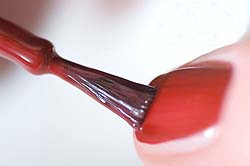 Let me say this also, I don't want them perfect. If a woman spends thirty minutes painting her nails, she's not the woman for me. That's too much perfection. But don't regress the other way and take to biting them either, that's a major no-no. I want a woman to show that she cares about how she looks but isn't too vain about it. Slap some color on there, blow on it a little, and then rush out the door cause you got a hour's worth of things to do in thirty minutes.

Know what I mean?

I personally have an aversion to dating women with perfect nails. That's just a little too anal, even for me. It's says a lot about her personality and we'd definitely butt heads over too many things in the future. For instance, the fact that I wouldn't be dressed perfectly. I'm kind of an informal guy. I can wear a tie and such, and carry that formal business look quite well. But I'd rather dress down, wear some faded jeans or khaki shorts, some slightly dirty hiking boots and a well-worn t-shirt with writing you can barely read. I go for casual.

And I'd expect no more from any woman.

Now, I know what you're thinking. It's the question on all your minds. What about toenails? Hmmm … this is a good one and I say to go for it. Again, don't worry about being too neat, if you get some of that candy apple red on your toes because you have a little trouble painting between the lines, no problem. A woman who will go the extra trouble to paint her toenails for you is a woman who deserves the very best. I don't have a foot fetish but I must say that painted toenails can be extremely sexy. Imagine a beautiful woman walking down the beach in some open-toes sandals, her little toenails painted a striking shade of pink. Just makes you want to hold her hand and think about what you're gonna have for dinner doesn't it?

Growing up in the South where there's a definite mix of tomboys and girly-girls, painted nails have been taken for granted. Even when the nails are worn down and chipping off on the sides, they still look good to men. Trust me. It turns us on to no end.

So women out there, take heed. You may think men don't notice those little things you do for us like painting your fingernails and toenails but on a subconscious level, we do. We notice them in ways that subtly attract us to you, which is the whole point isn't it? They give away little hints to your personality and secretly speak to us in age-old ways.

If you're ever sitting there contemplating whether or not you should slap some Revlon Apricot Freeze Glimmer Gloss on, take the extra few minutes to do it. You'll be glad, I guarantee it.