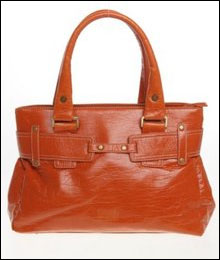 Growing up, I was kind of a goody-two-shoes.  I really never did anything wrong.  I was only grounded once (a story for another time).  I lived my mischievousness out vicariously through others.  Thus, the story of the pocketbooks and fishing line.

My friends and I lived way out in the country on a road that more or less existed to get people from A to B.  Our little community was neither A nor B; we lived in the middle of nowhere.

Entertainment for little boys was scarce in the Summer.  Bike riding.  Baseball.  Basketball.  Fishing.  You’ll notice that none of these activities drain the devilishness that lives inside of every little boy.  Boys need an outlet for these urges.

My friends found such an outlet.  Pocketbooks and fishing line.

(Note:  I was not part of this.  I only heard about it a million times.)

The group had started out with throwing rotten apples at pickup trucks, but soon realized after one swerved and slammed on the brakes, that the activity was a little too dangerous.

So one of the guys came up with the idea of pocketbooks and fishing line.

Someone grabbed an old pocketbook from their mom’s closet, filled it with leaves, and left it by the side of the road.  And then they waited in the bushes.

It was great!  People stopped.  They picked the pocketbook up.  They rummaged through it.  They swiveled their head around suspiciously as they extracted handfuls of leaves.  Then they dropped the pocketbook, fled to their car and gunned it out of there.

It was a perfect prank where no one got hurt.  It was hilarious beyond belief.  It was raucous fun for four young country boys.

One old man stopped, picked the pocketbook up, and without even looking in it, walked up to my friend’s house and set it on the porch.  The practical joke suddenly turned into a study of human psyche.  They milked it day after day, observing people’s reactions and giggling from the safety of the bushes.

Until one day, a guy stole the pocketbook.

That’s the day the fishing line came into the equation.  One end was tied to the pocketbook and the other was kept in the bushes.

Enter a new “interactive” part of the equation.

Sometimes, one of the guys would pull on the fishing line just as the pocketbook was being reached for.  Other times, they’d wait until it was in the person’s hands.  Great fun.  Didn’t Alan Funt do something like this?

Then one day, a gang of bikers stopped.  Leather, tattoos, chains, Harleys.  The boys watched quietly from the bushes as the leader snatched the pocketbook from the side of the road.  He reached inside, growled as he pulled out leaves and as he tried to throw it back to the ground, he became tangled in the fishing line.  This was one mad biker.

You can imagine what happened next.

I often think about the biker incident and wonder if somewhere out there, an old biker is sitting in a bar knocking back a few shots and drinking a few brews.  He’s telling the same story to his buddies about the time he stopped to pick up a pocketbook on the side of the road.  Only he ends it with four gangly teenagers screaming like girls and running faster than the wind.