Pop Tarts (among other things) 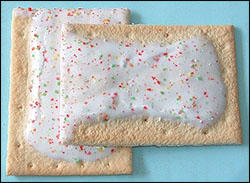 My normal breakfast consists of scarfing down a Pop Tart on my way to the office in the morning.  Usually because I’m too lazy to fix something healthy to eat.

But lately, I’ve been into the Strawberry and Blueberry Pop Tarts.  Brown Sugar and Cinnamon too.  So that’s where this article comes from.

I’m not too picky but I like my Pop Tarts to have frosting.  Whoever invented the Pop Tart without frosting missed the whole point of a Pop Tart to begin with.  You eat a Pop Tart because it’s tasty and quick and gives you just enough sugar to pull you over the morning hump.  They give me heartburn too but that’s for another time.

I’m not a Pop Tart snob either.  I buy the store-brand Pop Tart because why should I pay the Kellogg company another dollar for my Pop Tart?

Well, the other day on the way to work, while I was eating my store-brand Blueberry Pop Tart, I realized something.  Why is the Food Lion Pop Tart’s frosting always screwed up?

It’s a well-known fact that the same baking companies that are contracted to make Pop Tarts, make all the competitor’s Pop Tarts also.  They do this with cola and cereal and everything else that sells a big enough volume.

Supermarkets are actually large distribution channels and the more of their brand they can sell, they more profit they make.  But they’re able to get the product made cheaper because their advertising budget goes toward making a brand name for all their products, not just one.  Plus, they don’t have to pay a third party to get their product distributed.  They ARE the distributors.

Back on point, why are my Food Lion Pop Tarts not as good as the Kellogg’s Pop Tarts?

Sure they have a slightly different recipe to follow for the Food Lion Pop Tart but I don’t think that’s the reason.

I think it’s a conspiracy.

The bakers (or whatever those people are called) purposefully screw up the store-brand Pop Tarts.  They’re paid to do it.  Why else?

They use the same frosting machine so why does the Food Lion Pop Tart never have good frosting coverage?

Why are the edges always a little crumbly like they’re close to going stale?

But in the end, I don’t really care.  It’s not like I’m going to quit buying my Food Lion Pop Tarts.

I just wanted to bitch about it a bit.  Thanks.