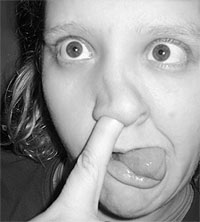 You’ve seen these people.  We all have.  The people that engage in some good old fashioned public booger mining.

That’s my politically correct term for nose picking.  I call it booger mining.  Ingenious, huh?  Conjures up visions of midgets with hardhats and lanterns, singing camp songs as they descend into the depths of a nasal cavity for another toiling day of mining.  For boogers.

These people I speak of, they pick their noses in public.  On the street.  In a car.  In a deli.  In a bar.

These public booger miners either a) don’t care if you see them digging out a juicy green gob of goo, or b) don’t realize anyone is watching them stick their finger in up to the first knuckle.

They think they have a personal shield around them that renders their actions invisible.  Like going the speed limit in a car means no one can see them digging around for that slimy one that you can never really get a good grip on because there’s no true nucleus.  It’s just a smushy gelatinous glob of mucus that squishes under your finger, then surrounds it like you’re starring in a sci-fi movie.

These people think that once they get the elusive offender out, they can flick it away or wipe it on a hidden portion of their pants (or dress) and it never happened.  Like it didn’t count or something.

Like the five second rule when you drop a candy bar on the ground.  If you pick it up quick enough, it never occurred.  You can still eat it because you got it before the germs had a chance to know it was there and latch on.

But then again, you’ve got snot on your fingers, so why the hell are you so damned worried about floor germs?