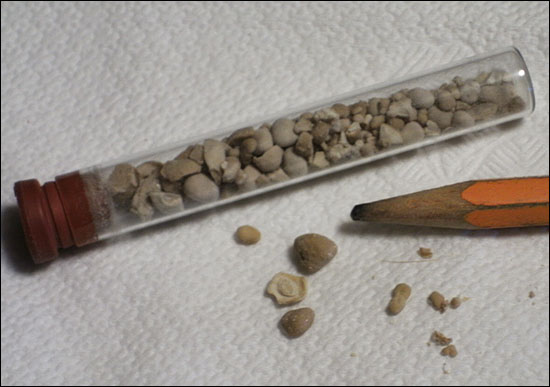 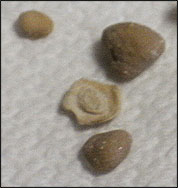 I also finalized moving to a new house.  More on that later …

What really made this weekend special was yet another kidney “stone.”

I’ve passed 105 of them so all in all, kidney stones are not that special any more.  A few hours of pain, some really nice pills, maybe an upchuck or two … and voila, a brand spanking new baby boy!

Saturday I bought the Aztek and I wasn’t enjoying myself.  The stone I’d been fighting since Thursday was doing a number on me.

In fact, I felt so bad that on the 30-mile drive back home (to my new home), I rode in the passenger seat while my dad drove.  How about that?  Get a new car and don’t even get to drive it.

When I got out of the car, the stone made its move.  Literally.  It began slashing its way through my ureter like a Division 1 point guard. 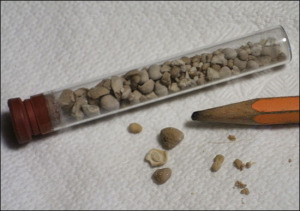 Some of my kidney stone collection.

I fell to my knees.

After finally unlocking the house for my parents to see it the first time, I christened the bathroom with its first kidney-stone-upchucking.

The water in the toilet was a pretty blue.  Then it wasn’t.

Stone #106 then scraped its way through to my bladder, I think.  I know that after that point, I only had residual pain and that’s what usually happens.

Now I have to romance the “stone” with gallons of water and hope it’s not as big as I think it is.

There’s always the risk of grinding to a halt an inch from freedom.

And yes, that’s happened before too.

I guess you could say that my new Life 3.0 has gotten off to a rather “rocky” start.