I admit it, I'm abnormal when it comes to safety.  I don't know if it's because of nature or nurture, but for some reason, whenever there's a hint of danger, I opt for the safe way to do things.

Depending on how you look at it, this will either appear stifling or sweet, but when I was dating wife number 1, I wouldn't go anywhere until she buckled her seatbelt (of course, this only worked when I drove).  She never wore her seatbelt, no matter what.  Not even in inclement weather.  Not even after she had an accident where she busted her lip on the steering wheel and cracked the windshield with her head.  She never gave me any reason why she hated seatbelts so much.  I blame her strict Catholic upbringing.  It was only natural she buck against the system as soon as she had her first taste of freedom at college. 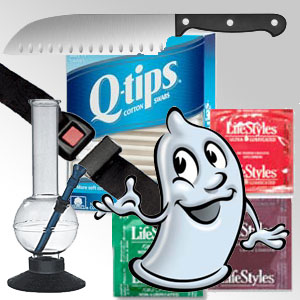 Whenever it came to sex, I was known as Mr. Latex.  Due to the threat of disease or pregnancy, I always wore condoms.  I even had to pass up some amazing situations because there was no latex available.  It was tough, but I'm a self-professed safety freak.  And believe it or not, I've only had unprotected sex with three different women.  I was engaged to one and married the other two.

I will not use a QTip while I'm near anything that has even a remote possibility of moving, such as a person or a door.  Have we all heard the story of the kid who was cleaning his ear with a QTip in front of the bathroom door?  Someone opened it and jammed the QTip deep into his ear, thus causing him to lose his hearing and bleed like the ear/leech scene from the Star Trek movie, Wrath of Khan.

I carry knives like a professional.  They scare me.  I cut my finger real bad once and ever since then, I replay that memory every time before I pick a knife up.  Even popping the top on a can of beanie weenies.

I won't even get near electricity.  Not unless it's switched off, unplugged and I'm wearing rubber gloves.  It scares me.  It's the invisible death and Hollywood has taught me to respect it.  To fear it.  That, and a cousin who coaxed me into touching an electric barbed-wire fence when I was seven.  So not fun.

I'm an extremely defensive driver, I visualize wrecks and flat tires and dogs in the road whenever I'm driving.  My brain is constantly calculating and recalculating what-if scenarios when I'm behind the wheel.  I can't help it.

I used to be accident prone and I'm not far off from it now.  And it may just be in my genes to be safer than most.  I don't know.  I think I'm a product of nature and nurture with a touch of neuroticism to spice it up.  I've accepted it, I'm a bona fide safety freak.