It was many years ago on a Christmas Eve that my Aunt Pat did something none of us have ever let her forget.  On a dare, she ate a cat treat, one of those little soft chewy ones that come in the resealable foil Ziploc packs.  I think it was salmon flavor.

First, a little background.  In the family, I was known as the cheapskate.  If there were any penny pincher jokes, they were always aimed at me.  And Aunt Pat was the butt of all the blonde jokes, despite being a natural brunette and never having had anything close to blonde hair.  She had that dingy thing going pretty good though.

A few of us were sitting around the table, playing games, because that's what my family does on Christmas Eve.  We gather about thirty family members in a single house, eat like Southerners at a Sunday dinner, open presents, and play games till time to head home and get ready for Santa.

I'm not sure how it came up, but I think I was giving one of our cats a cat treat when Pat said something like, "I wonder how those taste?" 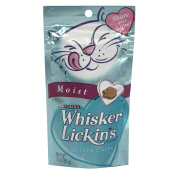 She quickly said no but I could see a yes in her eyes.  She wanted to try it, but she needed to be cajoled into it.  Like the first time you ever went skinny dipping.  You had to appear reluctant even though you really wanted to strip down and get in, you just needed someone to give you a little nudge.

A cousin spoke up and said, "I'll give you a dollar."

I could see the twinkle in Pat's eyes but she still said no.  Then my sister upped the ante with another dollar.  The answer was still a no, although she was now reading the packaging, studying the myriad of ingredients that go into a chewy salmon cat treat.

She just needed a small push so I sidled up to the edge of the pool and gave her a big shove.  "I'll throw in a five."

Aunt Pat perked up and looked at me with wide eyes.  She couldn't believe what she was hearing.  "You'll give me five?  Mr. Tightwad himself?" she said.

I smiled, I had her.  I pulled out my wallet and extracted a crisp clean five dollar bill, slapping it on the table for effect.  "Eat it straight and swallow it, no water till it's down."  Those were my terms.

"You're paying five dollars?  You?"  She still couldn't get over the fact that the skin flint was ponying up five dollars to see the show.  You'd think I was offering her twenty to flash a priest.  Of course she might've done that too but five for a cat treat was on the table now.

When I nodded again and took my hand away from the five, leaving it in the middle of the table, she didn't hesitate another second.  She pulled open the Ziploc, plucked a salmon treat out and popped it in her mouth.  She chewed and made grotesque faces that brought us all to tears with laughter before she finally swallowed.  We made her open her mouth and lift her tongue before she could have anything to drink but it was painfully obvious from her expression that she'd eaten the whole thing.

Aunt Pat wore a scowl for the rest of the night and later informed us that she tasted salmon well into the next day.  And even now, every time she smells fish or cat treats, she has a Pavlovian response and her stomach gets upset.  Throughout the years, she's received numerous gag gifts like other flavors of cat treats (with tartar control), catnip and cat toys.  I think someone even gave her a scratching post one year.  That may have been me.

Not a single family get-together goes by where the cat treat incident isn't mentioned and laughed at.  A few old jokes are retold and a few new ones added to the mix.  And there are always enough smiles and laughter and shaking heads to go around.

Pat always says that once I offered up the five dollar bill, she had to do it, just because it was cheap ole me that offered it.  She said it was worth it just to separate me from my money.  But I think this old miser got his five dollars worth, what do you think?