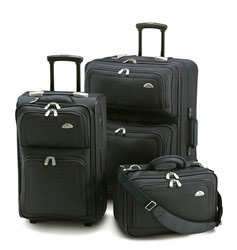 I caught the ass end of a movie on cable today.  I don’t remember the name of it but it doesn’t matter.  What I want to point out is that they were shooting at suitcases and I don’t know why.

Actually, it was a typical Hollywood shootout scene on the TV; the good guys were pinned down by the bad guys with nowhere to go.  And to make the scene as realistic as possible, neither side ran out of bullets.

Like every shootout scene ever filmed in the seventies.

So here we are, the good guys caught in a film writer’s pickle.  There’s no way out because the writers didn’t feel the need to provide one.  Cheap tricks work just as well, right?

Like Pam Ewing waking up from a dream in the show Dallas.  Or another actor playing Lionel in The Jeffersons instead of killing him off when the original actor left.  Or the infamous Hollywood Judo Chop to knock a character out cold when the good guy needs to sneak by a guard without (god forbid) killing him.  Or any of the millions of other cheap tricks they pull.

They think we’re stupid or something.

You know how the good guys got out of their jam this time?  They threw a bunch of suitcases out as a distraction.  So naturally, the bad guys shot at the suitcases because as we all know, suitcases are dangerous.  Especially those Samsonite suitcases.  Gorillas can’t even destroy them!  (for you kids, this is a reference to a famous commercial in the seventies)

The bad guys (who happened to have an IQ just barely larger than the suitcases themselves) were totally faked out by the classic suitcase diversion.  They shot them up (a hole never appeared in any of them, must have been Samsonite) and the good guys used the diversion to skate out a side door to freedom.

I just have one suggestion for the next time Hollywood feels the need to use this trick.  Throw the writers out to get shot instead of the suitcases.  That’s a win-win situation for us all.