I was hanging out with a bunch of guys watching the US Open on television the other week.  We were watching the women's game (no comment) between Venus Williams and Jelena Jankovic when one of the guys said, "Man, I'm getting tired of all these foreigners coming over here and stealing our sports."

I looked over at him but said nothing.  He continued, "When they gonna learn tennis is our sport and we're the best at everything."

That prompted me to say something derogatory.  "John," I said, "please stop being such a redneck."

He looked at me in a redneck way, throwing out redneck vibes in waves, then said, "What're you talkin' about?" 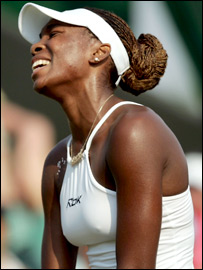 Venus Williams losing at the US Open

"Well," I began, turning toward him.  "First of all, tennis ain't our sport.  It wasn't invented here.  Tell me something … where's the Superbowl of tennis?"  I didn't wait for an answer because I didn't have all day.  "Wimbledon ring a bell?  You know that's in England?  Tennis is an English sport.  Same with golf, you know."  I didn't want to take the time to explain the difference between Scotland and England because he'd just say they all sounded alike anyway.

"And second, we are not the best in everything.  We're pretty much the best in the American sports like baseball and basketball but at everything else, we're just merely good."

"Cain't nobody touch us at football," he countered, a lump of chewing tobacco in his lower lip.

I closed my eyes and shook my head.  "John, nobody else even plays football except Canada and come on, they're Canadians.  They can't score unless they're wearing skates."  The hockey joke went way over his head.  In fact, most of the conversation did.  "Tell me something, John, who's the top player in men's tennis?"

I continued, "Roger Federer, that's who, and guess what?  He's not American, he's Swiss, from Switzerland."  I added that last part because I wasn't sure he knew who the Swiss were, except the people who made those pocket knives and snack cakes.

"Tiger Woods is American."  This was the best come back he had.  I felt sorry for him.

Tiger Woods is a phenomenon, he's not human.  But how could I explain that to him?  And the fact that America lost the Ryder's cup five out of the last six times would escape him.  In fact, if I mentioned the Ryder's cup, he'd probably counter with something about the FedEx Bowl or UHAUL All-Star game.  I just shook my head and turned back to the TV.

Sometimes it just doesn't pay to explain things to a redneck.