Steven Seagal is a Dick

Steven Seagal isone of the worst action movie heros of all time (apologies to Chuck Norris).  Every movie of his is the same plot with the same moves and the same outcome.  There’s always a bunch of people fighting with guns and his character usually abhors guns.  When one is in front of him, he’ll walk around it to disarm a guy with a pinkie twist while the guy shoots 5 magazines of bullets at him, always missing at point blank range.  But amazingly, the pinkie twist takes the guy down in half a second.

I mean, if you’re gonna make an action movie, at least try to make it somewhat believable.  Give us a little credit here. 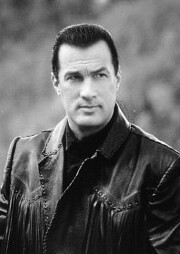 Then there’s the slappy-slap move he always makes. A bad guy comes at him with a knife and he plays fuckin’ pattycake with the guy’s forearms and the knife maybe slits a button off his sleeve. And the bad guy’s always some ex-Navy Seal marine type who’s gone to the dark side. Or maybe some Russian Colonel with a nuke.

I hate that slappy-slap move; he doesn’t even make a face while he does it, like he’s got a frappacino waiting for him off-camera and he’s just biding his time till he can slurp it down.

And here’s another thing: Ever notice how all his movies only have three words? Go ahead, take a look. Okay, well, maybe only half (14 of 27).

Above The Law, Hard To Kill, Marked For Death, Out For Justice, On Deadly Ground, Under Seige 2, The Glimmer Man, Fire Down Below, Half Past Dead, Out Of Reach, Into The Sun, Today You Die, Mercenary For Justice, Flight Of Fury.

If you actually are bored enough to check up on me … you’ll see that out of his first 8 movies, 6 of them had only 3 words. Makes you wonder if his contract had some section about movie titles having to be dependent clauses.

Here’s what’s even sadder: he pretty much produced all his films. He’s got no one to blame but himself, which makes sense in a way.

And as a side note, he wrote his first film himself ( Above The Law ) and five more since 2003.

Wonder why he didn’t write all those others?

Maybe he was too busy playing slappy-slap and pinkie-twist with the neighbor’s dog. Or maybe combing his ponytail. Or perfecting that no-expression acting style.

Hmmm … or maybe just guzzling down a few brews to make that sexy beer gut a little bigger.