That Time of the Year 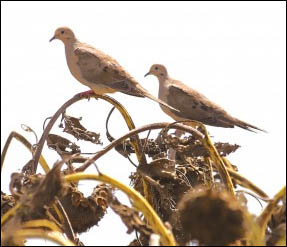 It’s here, it’s finally here!  I never thought it would come but now it has.  Dove Season officially opened in North Carolina on Labor Day!!

Yep, you heard me.  It’s now legal to go out and shoot those pesky doves that are always eating up the garden.  The good thing is, you can bag up to five of those little buggers every day.

Seriously folks, I didn’t know dove hunting still existed.  Do people eat doves?  I don’t know about you, but as far as birds go, I can’t imagine doves being very tasty or very meaty.  Once you pull all the buckshot out of one, what do you have left?  Four ounces of actual meat?

How do you cook it?  Is there a dove cookbook?  I can imagine the recipies:  Dove Stew.  Dove a l’Orange.  Dove with Mac & Cheese.

Now that I know there’s a Dove Season, I wonder if there’s a Robin Season?  A Sparrow Season perhaps?  Or maybe a Blue Jay Season?  They’re mean; my cat used to love to chase them.  Even bagged a few himself.  Why not declare war on them officially?

There’s a turkey season too.  That makes more sense to me because not only do we eat turkey, there are turkey cookbooks and even a national holiday dedicated to the feasting of the bird.  A single turkey can feed an entire Southern family with enough left over to eat sandwiches for a few days.  That’s practical.

There’s also a duck season.  I know this because of Daffy and Elmer.  And there’s a pheasant and quail season.  I know these because I had a pompous boss once who thought it quite manly to shoot quail at a quail club.

What’s a quail club you ask?  It’s a place where rich folk drop half a grand to go out on a couple acres and shoot quail that’s been stocked there like one of them small trout ponds or gem mines in the mountains.  Rich men do this because they can’t bother with the “hunting” part of going hunting.  Takes too much time.

The phrase “shooting fish in a barrel” comes to mind.

I’m not kidding about this quail club, check this out:  Backwoods Quail Club

And here’s another.  Be sure and watch this instructional video.  Uh, uh … bet you can’t do it without laughing:  Huckleberry Ridge Hunting Club

The important thing, however, is that Dove Season is now open.  Hunters from all around can head to the fields with their dove calls and dove decoys and spend the day hunting dove and being manly.  And if you’re quiet … real quiet … you can hear what it sounds like, when doves cry.