The Best Water I Ever Tasted

I was talking with some friends last night and the topic turned to the best water we'd ever had.  One guy said he took a drink out of a fountain at work that day and it was the best water he'd ever tasted, better than anything from a bottle.  That got me to thinking, when and where was the best water I've ever drank?

Water isn't supposed to have any taste or smell.  But it always does.  It may be faint and barely noticeable but it's there nonetheless.  Whether it's city water tainted with a splash of fluorine or well water laced with a little red clay, there always seems to be some aftertaste. 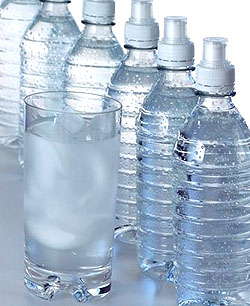 One guy said the best water he'd ever had came from one of those old wells, the kind that still had the bucket that you lowered.  It was his grandfather's well and he recalled a memory of dipping it down into the darkness and bringing it back up, brimming full of cold fresh water.  He drank from it and it seemed to change his life.  As he recalled the experience, he closed his eyes and relived it like it had just happened earlier that day.

Another guy was a Yankee, from New York, and he just stared at us like we were all crazy.  Well water?  He'd never be caught dead drinking water straight from a well.  Water was meant to be served in a plastic 16 oz bottle, not a dirty country well.  That was so primitive.

I began searching my memories for my best drink of water and recalled an experience when I was a teenager and a group of us went hiking in the mountains.  I remember us finally getting near the top and finding a stream, dipping our bottles and taking a long drink.  It was good, cold and refreshing and virtually taste-free.  It was the kind of water that some corporation would pay millions to bottle and sell to the world with a fancy logo and slogan, maybe a commercial with a blonde, her hair back in a ponytail, perched on a mountain bike, tipping the pretty blue bottle up and posing with an expression like it was the best water in the world.

But then it hit me, the memory came flooding back like a tidal wave.  The best water I ever tasted.

I was a little kid and staying over at my cousin's.  It was the middle of a dreadfully hot summer and we were playing outside, probably some innocuous game like tag or throwing frisbee or something.  We went to the back yard and turned on the spigot.  Hooked to it was a long green garden hose, old and cracking in places and it probably wouldn't last the rest of the summer.

At first, the water that came out was too hot to drink, having been in the hose all day, baking in the hundred degree sun.  But then came this blast of cold water, water so cold it made you feel like a peppermint patty.  The water was the sweetest in the world, we took turns holding the hose up to our mouths and sucking it down by the mouthfuls.  Our bodies cooled instantly yet our thirst wasn't quenched, we must have drank for ten whole minutes.  We were young boys after all, we'd just sweat out gallons in the southern sun and humidity.  In fact, the water was so good that we drank too much, we had to go sit down in the shade and rest a while.

I don't know what happened next but it doesn't matter, I remember that water and that's what's important.  It was literally the best water I'd ever tasted and to this day, that judgment still holds true.