The Bully Who Found God

Everyone remembers a couple bullies from their school years.  But there's usually one in particular that always stands out.  He was the meanest, snottiest excuse for a human being on the face of the earth.  He never had mercy and he never cared for anyone but himself.

There was one I specifically remember.  Let's call him Danny Parsons.  He was a little red-headed asswipe who used to pick on people he knew would never fight back.  He was undersized but aggressive and preyed on people's weaknesses.  He was a typical bully.

Danny did just well enough in school to keep his parents off his back and in his corner whenever he got in the smallest amount of trouble.  He never did anything too big because he was too much of a wus to fear any true retribution.  He was a class clown who made people laugh by putting others down, calling them stupid or ugly or fat.  Danny was scum.

I'm sure you can figure out by now that I was one of his unfortunate victims.  It was twenty years ago but I still remember it as vivid as last week.  While Danny was usually in all the "general" classes and I was in the "smart" classes, there were still a few that overlapped.

One such class was 9th grade Physical Science, Mr. Beamon's realm. Now here's a teacher who seemed clueless to the real world. He was either a true moron or so close to retirement that he just didn't give a damn. In all actuality, I believe it was a healthy mix of the two. 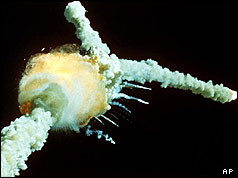 Danny used to steal stuff from his classroom. Nothing important, and nothing he needed. He did it just to be mean. He threw spitballs and erasers for the same reason. In an unrelated memory, I was sitting in this classroom when the Space Shuttle Challenger blew up. We were watching it on TV because it was a historical moment, the first civilian school teacher, Christa McAuliffe, was on board. It was a big deal. Danny Parsons laughed when it happened.

We also had gym class together our senior year. Danny was fairly athletic but not the best in any sport, and I held a little satisfaction that I was better than him at everything. But I was a late bloomer, growing ten full inches and my wide chest in the last two years of high school. I went from a puny little guy to one as big as our front line on the football team. The coach actually stopped me in the hall one day and asked me why I wasn't on his team. I told him that (1) I wasn't into pain, and (2) unless he could give me money for gas and dates, I wasn't giving up my job. End of conversation.

I had a couple of friends in this gym class, they were both scrawny and shy. Like I used to be. Danny picked on us in little ways, nothing big, just enough to show his contempt for the world. Hurling curse-riddled insults for laughs, giving a little shove in the hallway followed by a loud laugh to show off, pulling someone's shorts down on the playing field.

My senior year, I decided it would happen no more. There was one particular day in gym class when we were playing softball. I was covering first base and Danny was batting. He hit a slow ground ball to third who threw him out. I was still stretched out with my foot against the inside of first, catching the ball, when Danny ran by and kicked my leg. I was so surprised that at first I just stared after him as he ran down the baseline. Then the anger built up and I cocked my arm back and threw the ball at him.

I missed but it surprised the hell out of him. Who was this nerd challenging him? He turned and started to say something smart to me but I was already advancing on him. I wanted revenge for all those times he'd picked on me and my friends. I was big now and it was up to me to even the score.

I don't exactly remember what happened next because I was seeing more red than a Mexican bull. I do know we never fought but I also know that I wasn't the one who backed down. Score one for the meek.

But it was a hollow victory. The bully hadn't been beaten to a pulp by my enraged fists. I lacked the meanness to take the confrontation to the next level without more provocation. He lacked the guts to push my buttons when I was primed and ready to go to town on his freckled ass.

As luck would have it, I was given another chance. 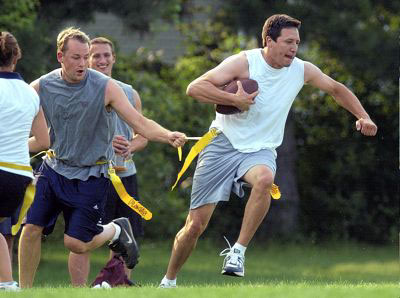 The Sport of Flag Football.

Later that same year, we were playing flag football. For the uninitiated, there's no tackling in flag football. You attach flags to your waist and a defender must pull a flag instead of taking you down. That day, my friends and I were on one team and the perpetual bully, Danny Parsons, was on the other. See the setup here?

You've probably guessed what happened. One of my friends had the ball, running through defensive territory to the goal line, and Danny pushed him violently to the ground. His laugh echoed throughout my head until the next play, when I asked for the ball and went straight for him. He stepped out of the way just before I mowed him down. He got the picture. There was no more bullying that day.

I saw Danny once more after school, years later when I was in college. He was a changed man, his hair cut short and his clothes clean and conservative. And he was carrying a Bible, a pretty big Bible. Something huge had happened to him, something life-changing enough to make him repent his bullying ways. Someone even told me he'd been "saved."

I didn't know how to react. Here's this guy, who'd bullied everyone in the world and I hated his guts for it. But he'd changed. How could I hate him now? How could I despise his very soul for existing now that he'd come over to the light side? He'd become a good guy, one of us, one of the non-violent meek who are supposed to inherit the earth. Yet I still harbored ill will toward him for the past.

I surveyed my emotions that day and looked deep inside myself. What kind of person would I be to still hate him? How pure and innocent would I be if I held a grudge? What would it say about me if I didn't extend the olive branch?

It was time for some major introspection. I went soul-searching like I'd never done, digging into the farthest recesses of my psyche, diving for the greatest treasure of all time. To learn of my true self.

And do you know what I discovered? What I found when I peeled back all the layers of my personality? I found humanity. To this day, I still want to kick his scrawny little red-headed punk ass till he begs me over and over for mercy. It would feel pretty damn good. Repent this you son of a bitch.