I was eating chicken with a friend the other day, just shooting the breeze and enjoying a nice leisurely meal.  He's not necessarily an odd guy, grooms himself decently enough, has a nice tan, a beautiful wife, etc.  But there are some odd things about him.  For one, he raises exotic animals, like tigers and stuff.  He also walks with a bit of a stoop and quotes the Bible like it's a sports team's stats.

Now, none of this makes him a bad guy, he's a pretty good guy actually.  From what I can tell.  But you know how that goes, we all have our secrets we don't let just anyone know.  For instance, I shave in the shower.  Not a big deal but it's not something I would tell someone in a job interview, you know? 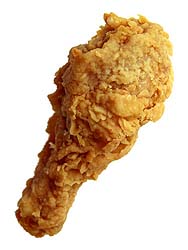 Not the actual chicken leg.

Well, I hit my next piece while trying not to stare at this guy eating all that stuff that's not really supposed to be eaten.  And just when I think my surprises are done, he sticks that bone in between his molars and bites down, snapping off a small portion.  Then, like it's a piece of hard candy, he just starts chomping and grinding it up.  He's eating the fucking chicken bone!  What the hell?

I know at this point, I'm staring but I no longer care.  This guy's eating a whole chicken bone and I can't believe my eyes.  I'm killing my next piece, a thigh, in the normal fashion (meat and crunchy skin only), and he sits there slowly eating this entire chicken bone.  There was absolutely no waste.  I swear.  I don't even remember if he used a napkin or slurped the grease off his fingers.  At that point, it didn't matter, did it?

Have you ever seen something like this?  From anything other than a pet cat or dog?  I haven't or maybe I just don't get out much.  I guess, like the old saying, this guy really was raised in a barn, huh?  Maybe that's why he has exotic animals instead of normal ones?  I have no answers, only more questions.