The Concept of Separate Bathrooms

I have some simple advice.  And since I've been married twice and freely admit to my mistakes, you can take it for what it's worth.  I can safely say that even though both marriages ended in divorce, I learned a lot during those relationships.  One tidbit I've gleaned is to always, no matter what, use separate bathrooms.

Marriage is a solemn vow between two people to spend the rest of their lives together, till death do they part (or one party changes her mind, whichever comes first).  During a marriage, you share everything with each other.

Holidays.  Ambitions.  Desires.  Goals.  Housework.  Pepperoni pizzas from the place down the street when neither of you feels like cooking. 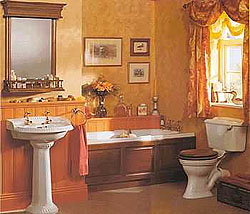 Bathrooms should be separate. There, I said it. They just should be and I'll tell you why. Because one thing you should never share is what happens in a bathroom after you've both gotten the Chile Relleno and Burrito specials at your favorite Mexican restaurant.

You know what's going to happen afterwards, but neither of you talk about it. You concentrate on the meal and forget about the bodily function that results an hour later.

It's not pretty and God didn't design it to be. He gave us the concept of separate bathrooms for a reason.

The first rule I learned as an adolescent boy was that girls only went to the bathroom to pee. Nothing much else. They fixed their hair, they freshened up their makeup, they shared stories about boys. But they didn't do anything else and they most certainly didn't make noise when they did it.

Girls are made from sugar and spice and everything nice. That saying proves they don't do that. Boys are made from snakes and snails and puppy dog tails. Okay, whatever that means, stupid American saying messing with the flow of my story.

The point is, men and women have separate bathrooms in public places. For a good reason. And they should at home too. I personally believe it would decrease the divorce rate by at least twenty percent. Maybe thirty.

Your wife doesn't want to hear, see or smell what you do after you've processed a plate of refried beans and Mexican chiles. It comes out of you and even you don't want anything to do with it. So why not keep it as private as you can? Not even a powerful bathroom exhaust fan can clear the effects of Mexican food in less than half an hour.

And trust me here. As a man, you never, ever, ever want to destroy the perfect perception you hold of your wife by strolling into the bathroom after her to find a stopped-up toilet and an odor that melts your chest hair.

There's no need to say any more. Separate bathrooms. Period.