I had a once in a lifetime deal pass my way the other day and I felt the need to tell you about it.  If you had a chance to make forty to fifty thousand dollars flipping a house, wouldn't you be excited too?

A tenant my bosses are about to evict dropped by the office to explain why she hadn't paid rent.  She had two houses that had been given to her that she'd been working a deal on.  The deal fell apart, blamed on all the recent mortgage companies going under.  She was in dire straits and was about to lose her car also, a fifty thousand dollar Range Rover.

And to top it off, she had surgery two weeks ago.  A boob job.  Serious guys, I can't write stuff this good.  All I do is spit it out as it happens. 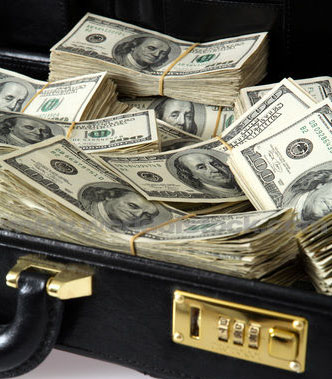 The businessman in me casually asked her questions about the houses.  The best time to get a bargain is when one party needs money quick.  Especially in the real estate business.  Even though I saw an amazing deal shaping up, I kept a straight face the whole time, posing seemingly inane questions to gather as much information as I could.

And besides, the family was evil, forcing their father into a nursing home.  I'd have no problem putting people like that in the street.  Would you?

I acted as mediator and worked the deal between the tenant and my Dad, finding solutions to their concerns and time tables and money woes.  I won't bore you with the numerous interim deals I dreamed up or even the final creative one that satisfied all aspects and made everyone happy.

I'm an optimist and a puzzle solver, I look at a problem and I find ways to solve it.  My Dad is much more cautious, trying to find reasons why the deal shouldn't be done.  Together we make a great team and between us both, we'd forged a sweet little deal that would net us a decent sum of money.

And then my Dad got that nagging feeling.  That one that starts in the back of your head and grows until it occupies the bulk of your mind.  Something wasn't right, it was just too good and not everything added up like it should.

One of the last pieces of information I retrieved was that Willie actually lived in one of the houses.  So wait, he gave those houses to the chick and now she's selling them and we'll be evicting the very man who once owned them free and clear?  All because he couldn't afford to pay the $1000 taxes on each house and she had to do something before her credit was ruined (because the houses were now in her name).  What?  You smell it too?

I found Willie's phone number on the net and called him.  We had to hear from his that he had a place to go, that all this was okay and he hated his family that much.  When he answered the phone, I knew what was going to happen.  And I was right.

I explained who I was and why I was calling, to verify that all this was legit and to find out what would become of him.  You should've heard this poor man.  His voice was so feeble I had to stick a finger in my ear and press the phone against my head so hard it hurt.  Even then, I could barely understand him, he stuttered and had the speech patterns of someone who'd never finished sixth grade.

I almost cried right there on the phone.  Not because the deal was dead, because believe me when I say this killed it deader than the Grim Reaper ever could have, but because of the situation Willie found himself in.  This poor elderly man had been seduced and swindled, handing over two houses he'd worked his life to get paid off.  And now, he and his family were about to be put on the street with nowhere to go and ho money to go there with.  He'd essentially lost everything.

I had almost made a deal with the devil.

Through broken speech, I found out he'd hired a lawyer two weeks ago.  Pro bono I guessed.  I couldn't understand the lawyer's name and even thought it was right there in front of him, he couldn't spell it without major difficulty.  I won't share the attorney's name but let me assure you it's not a difficult name.

After ten agonizing minutes on the phone with Willie, I assured him I wasn't going to take his home and evict him.  In fact, I called his lawyer and warned her about what was going on, that she needed to file some junction or something to keep the houses from being sold.  She needed to get on the ball now because this harlot was lobbying hard to sell Willie's houses.

I was stunned when it was all over and I called my Dad to tell him that once again, his instincts were right on.  He wasn't crestfallen at all about losing the deal.  Easy come, easy go.  And neither was I.  Even now, as I write this later the same night, I can think of only one thing:

How can I help this man?