The First Dirty Joke I Ever Heard

I don't remember just how old I was, probably around seven or eight.  We had taken a family vacation to the beach and were staying with my aunt and uncle.  My uncle's older son and daughter from a previous marriage were there, too.  They'd just taught me how to play poker, Las Vegas style, and the girl cousin (let's call her Cynthia) asked if I wanted to hear a joke.  I said, sure, yeah.

Then she said it was a dirty joke and I believe my exact reaction was complete awe.  Not only was I going to hear a dirty joke from an "almost grown-up" (which is different than hearing one on the playground from your best friend who's also seven), but my older cousin, a GIRL and a hottie in her own right, was going to tell it to me.  Could life be any more perfect for a seven year old boy? 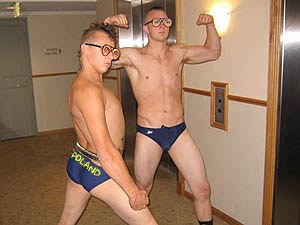 Before I go on, I must set political correctness aside and explain that during the seventies (before the term political correctness was invented), for some odd reason, it was chic to tell Polock jokes.  For those international readers who don't know, the Polocks were revered in American jokes as the most stupid peoples in the world.  Don't yell at me about it, it was just the way it was.  The same way foreigners think everybody from Texas wears cowboy hats and all inner-city blacks listen to rap music.  Of course, the generalizations are correct because most people from Texas do wear cowboy hats and most inner-city blacks do listen to rap but that's beside the point.  The stereotype just existed so the jokes grew up around them, like Jewish money jokes.  Get it now?

Cynthia began: A Polock was walking down the beach and saw a bunch of bikini-clad girls gathered around a normal-looking guy.  The Polock pulled him aside and asked him how he could attract so many beautiful women and the guy said he'd tell him his secret.

He said to go to the grocery store, get the biggest potato he could find, put it in his bikini Speedos and walk down the beach.  The Polock looked at him crazily, asked him to repeat it so he'd get it right.

The Polock went to the grocery store, bought the biggest potato he could find, put it in his bikini Speedos and walked down the beach.  But the plan didn't work, every girl that saw him ran the opposite direction.

The Polock was perplexed.  He'd done everything just like the guy had told him.  He'd gone to the grocery store, bought a big potato, put it in his swim trunks and walked down the beach.  So he hunted around till he found the guy, still surrounded by beautiful sexy women.

He told the guy he'd followed directions, just like he was supposed to.  He went to the store, bought a potato, stuck it in his shorts and walked down the beach.  But everyone ran away from him.  What was he doing wrong?

The guy looked at him funny, giving him the once-over, then broke out laughing.  He said, "You stupid Polock, you're supposed to put the potato in the FRONT!!"

Well, there you go.  It's not really that dirty, the dirty part is more implied but I understood it at age seven which says more about American culture than I'd like to admit.

P.S.  A quickie — the first Polock joke I ever remember … What's the difference between a Polish firing squad and any other?  A: They stand in a circle.

(NOTE:  I am not prejudiced in any way.  In fact, Wife Number Two was of Polish lineage, two generations off the boat.  When we were together, I used to joke that God was going to punish me for my childhood Polock jokes by giving me Polish children.  But alas, she divorced me.)