As a child during the 70s, when sugar was cheap and inflation a virtual myth, we were privy to a selection of breakfast cereals that, like 60s rock music, can only be crudely imitated these days.  From Lucky Charms to Golden Grahams to the Zeus of all cereals, Peanut Butter Crunch` , us Disco kids had it made.  And we didn't know how good we had it.

All the cereals mentioned above still exist to this day, along with other favorites like Frosted Flakes, Fruit Loops , Count Chocula , Apple Jacks , Cookie Crisp and Fruity Pebbles .  But you have to admit, they just don't taste the same.  The recipes have changed and the sugar has been screwed with.  Like colas switching from good old sucrose to high fructose corn syrup, changes were made to cut costs and save money. 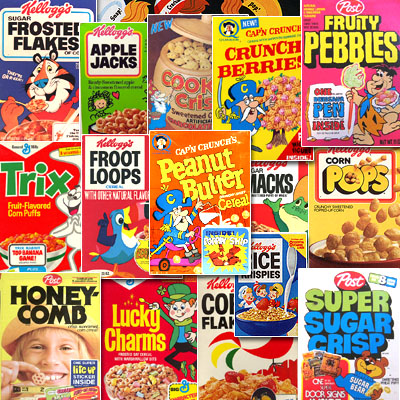 Even the mascots changed.  Tony the Tiger went from a tiger to a bland unisex cartoon.  Toucan Sam toned down his image and his colors.  Count Chocula went gay.  I don't even want to mention Lucky's Leprechaun and his overly rosy cheeks.  Remember the elephant from Peanut Butter Crunch?  His name was Smedley and he's no longer on the box.  Probably some politically correct crap PETA pissed about.  And lo and behold, the venerable Cap'n Horatio Crunch also fell victim to the mass media homogenization.

Back then, they created the cereal WITH the mascot.  Sugar Smacks had Dig'em.  Cocoa Puffs had Sonny the Cuckoo Bird.  Trix had the silly rabbit.  Grape-Nuts had, well, that's another story.  My point is, they developed the cereal and the mascot together.  It ticks me off nowadays to see cereals named after movies and TV shows.  They assign a name to a product only because the name's already marketable. 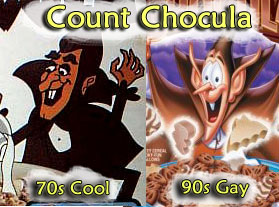 It's a sellout.  That's what it is.  Sweet and simple.  There's no effort to be creative at all.  There'll never be another box of cereal at the end of the rainbow or a Honeycomb Hideout or a Cookie Jarvis (the wizard on Cookie Crisp, he was phased out in the 80s, replaced with the Cookie Crook).  The creative geniuses that convinced Mikey to eat Life are out of jobs, replaced by mindless idiots in cardigan sweaters looking only at the bottom line.

Buying a cereal used to be an event.  As a child, whenever we went to the grocery store, I always ran straight to the cereal section.  I'd stare at the long row of colorful boxes, each their own unique size with prizes inside that stirred the imagination.  Secret decoder rings and cool plastic toys and treasure hunt pieces.  Being the first sibling to open a new box of cereal and dig down with your hand to get the prize was a highlight of childhood that doesn't exist in the same form now.  It was a rite, a ritual to behold.  The creativity is missing from today's cereals, replaced by cross-selling with the latest Pirates of the Caribbean movie. 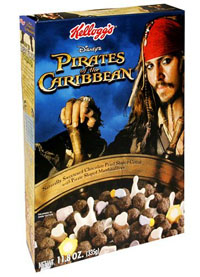 Then there were the other cereals.

I hated Corn Flakes and Rice Krispies and regular Cheerios (remember expecting the Honey Nut Cheerios and biting into the regular cardboard-tasting Cheerios?).  They were bland and had no flavor (sub: sugar).  But you had to admit; Snap, Crackle and Pop had some flair.  Without them, and the advent of Rice Krispies Treats, their cereal surely would have tanked.  They were truly original.  They could have even sold Shredded Mini-Wheats to the Sugar Bear.

Cereals just aren't what they used to be.  But then again, neither is the world.  It's not an excuse, it's a reality.  A sad reality.  But I have this to say … it's a sad time when our politically correct tendencies have spilled over to the last remaining bastion of childhood, the sugar-filled breakfast cereal.  Sugar is railed against and even removed from the name of cereals (Sugar Smacks -> Honey Smacks -> Smacks -> Honey Smacks).  Breakfast is a sacred time, leave our children be.  Let them enjoy their 10 essential vitamins and minerals as part of a complete breakfast.

(Want to relive some childhood? Visit the Sugar Frosted Cereal Museum for a much-needed trip down memory lane.)