The Jew and the Bacon 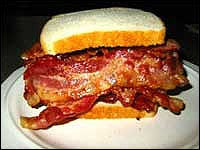 I have two bosses, a 49-yr old Korean woman and an 86-yr old Jewish man.  The woman is the caring, motherly type that treats me like another son.  The old man is a codgy bugger who built a couple million-dollar companies up from scratch and now plays around in the property management field.

The old man personifies the Jewish stereotype.  He has the typical long face and deep-set eyes.  He speaks Yiddish.  And he’s so tight with his money that he makes my dad look like Donald Trump in his spending habits.  (Read about my dad here)

The old man was originally born in Baghdad and moved to America to pursue the American Dream.  He lied about his age to join the Army just in time for WWII.  Twenty years later, people were lying about their age to avoid the draft.

The old man met his wife in their thirties and until she died this past year, they were together for fifty years.  A marriage that lasts that long, by default, has very few secrets.  A couple together for half a century becomes almost psychic in their thoughts, developing the ability to finish each other’s sentences.  These two were no different.

But I found out the old man and his wife had at least one deep dark secret.  They ate bacon.

Jews are forbidden by Jewish law to eat “unclean” food.  There are several food items on this list but the number one non-Kosher food is swine.  Hog.  Pig.  Pork.

In his wife’s last remaining days, the old man revealed to her that bacon was a pork product.  Somehow, some way, she didn’t know this previously.  She had steered away from ham and sausage and salami and hot dogs for eighty years.  While all along, she’d eaten bacon.

Wondrous bacon.  The most distinctive-smelling food in the world.  It was alluring enough for the old man to lie to his wife of fifty years.

Then for dinner that night, she asked for a BLT.  Extra bacon.