This past Sunday night, I ate dinner at my parent’s house.  Also in attendance were my sister and her new husband.  It was a simple dinner of grilled hot dogs with all the fixins and pan-fried potato slices.  The meal was more about the company than the food itself.

I made my two hot dogs with chili, mustard, mayo, ketchup, cheese, onions, Texas Pete hot sauce and homemade slaw.  In most hot dog joints, they call this Southern Style or Carolina Style.  It’s how I grew up eating them and to me, it’s how they should be made.

I’ve been through the streets of New York and bought a Sabrett’s with mustard and kraut.  They’re good, don’t get me wrong.  But they just don’t compare with a Southern Style chili dog.

It is my utmost belief that a person should have to scrub their hands after eating a hot dog.  The Southern Style hot dog accomplishes that and sometimes, you even have to take a shower and change clothes.

Dinner conversation ranged from such topics as the gas crisis (western NC was plagued by a gas shortage not seen since the late 70s), the impending election, what my nephews did this week that was funny, etc.

There was lots of laughter and catching up and the mood was light.  Almost festive, as if it were a holiday.

“Somebody want those last potatoes?” my mom asked, shoving a platter toward me and my brother-in-law, Darrell.  There were two potato slices left. 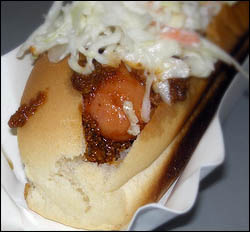 I shrugged and shook my head, full from my own helping of potatoes, not to mention my two all-the-way hot dogs.  Darrell also shook his head and the conversation continued.

A few minutes later, my mom said, “Anybody gonna eat those last potatoes?”

Again, Darrell and I politely refused.  I even made a full face, puffing my cheeks out and bulging my eyes while shaking my head.

Conversation turned toward movies we’d seen and once again we heard, “Anybody want those last potatoes?”

My next thought was that my mom has gone senile.  She’s only in her early sixties; surely this wasn’t the case.  Was it?  I wondered secretly …

Sometimes in the South, we’re too nice to grab the last portion of something.  It’s the manners we’re taught when we’re young.  So I looked at Darrell and said, “Eat the last potatoes.  I’m full.”

I looked around the table.  “Well, somebody needs to eat them so mom can get her {explicative} blood pressure back down.”  This got a laugh.  No one spoke up so I told Darrell, that in the interest of preserving everyone’s sanity, he should eat one and I’d eat the other.

He laughed and took one of the slices, seeing the benefits immediately:  my mom would finally shut up about the potatoes.

It worked.  She relaxed and before I grabbed the last potato, I asked her with a smile, “What’s so damn important about these last potatoes?”

She grinned and said, “Nothing.”  Then she added something that brought clarity to the whole insane episode.

“I just didn’t want your dad getting them.”