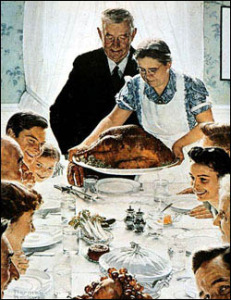 In days long gone, the dinner table served as a gathering place for families.  It was the social gathering site where the day was recounted over a hot cooked meal, and the family coalesced into a single unit after being apart for the day.

Life updates were exchanged over clinking silverware and emptying plates.  What happened at work?  How’d you do on that math test?  You know what the price of milk was going for at the supermarket?

Wants and needs, thoughts and wishes, hopes and dreams.  The dinner table provided the vehicle for any topic to casually slide into the forefront.     It was where possibilities were discussed, decisions were made, and lives altered.

Then came radio and families gathered in the den for shows that captured the imagination and stretched it like hot taffy.  Amos and Andy.  The Lone Ranger.  Sports contests were suddenly accessible by the masses, blow by blow, play by play.  Radio serials developed and a new generation of youngsters was mesmerized, influenced by the emergence of over-the-air programming.

Soon households acquired multiple televisions and families no longer gathered to watch a show; they split up so everyone could see what they wanted.

The video game console entered the scene only to exacerbate the divide.  Then computers and the internet appeared almost overnight, supplanting everything else before them.  Kids now walk around with a digital phone, listening to MP3s through headphones.  Parents have to check out Facebook and Twitter to be a part of their offspring’s lives, to get more than “nothing” as an answer to the age-old question, “What happened today?”

I’m not saying that the American family unit has eroded, but rather that it has taken on vastly different meaning.  The trick to redefine it is to embrace all these new tools at your disposal and apply them with the same vigor you would a tube of Ben-Gay.

Technology today is inter-connected and can serve to reunite rather than separate.  Little Johnny can upload a picture of the mashed potato sculpture he made in the school cafeteria.  You’ll see it while lamenting on Twitter about the meeting you’re about to enter and your spouse will share where they found a new place for cheap gas.  And later that day, you can peruse the profile of your daughter’s dreamy boy-of-the-week.

The dinner table of yesteryear will never be the same.  It will never regain its former glory of connecting the members of a family through the powerful tools of conversation and food.  It’s been replaced by a smorgasbord of technology designed to actually connect you more fully and completely than a family has ever been before.

The dinner table hasn’t disappeared.  It’s just transformed into a digital representation of itself, disguised as something new and sleek.  Embrace the new future of family inter-connection and bask in its robustness.  Learning a few tricks can go a long way toward getting to know your family better in an age where parents repeatedly complain they don’t know who their children are.  And while you’re at it, pass the biscuits and honey.