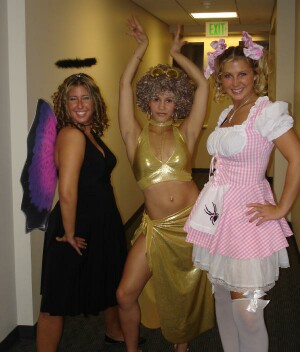 Halloween, a license to pretend.

Halloween is probably the funnest holiday ever invented.  Not only is it during the best time of the year, Autumn, but it is mandatory to be someone else.  The holiday is a license to pretend and what could be more fun?

Since the earliest days of my memories, pretending was part of my life.  Before my sister came along when I was four, I had pretend play-friends.  I remember playing with them in the sandbox, pushing the hardened cat turds around with my yellow Tonka bulldozer, pretending the entire sandbox was a construction site.

(I always wanted the write the word turd.)

Pretending isn’t just a part of a child’s life, though, it’s a part of everyone’s life.  We’re always pretending, only as we age, we call it little white lies.  We tell our girlfriend she looks great in those jeans.  We pretend we’re happy at our dead-end jobs.  We fake our reaction when the neighbor gushes over how beautiful their new baby is.

Then one day a year, we are expected to become something we’re not.  We can pretend to be somebody else.  We can even pretend while being ourselves and then say and do things we want to every day, but can’t because societal norms won’t allow us.  The co-worker that comes to the Halloween party dressed like a hooker?  More than likely, she didn’t have to borrow those clothes.  That guy who comes as the Godfather?  He’s always had some deep-seated psychological issues.  That guy who comes in a dress and blouse?  Need I comment? 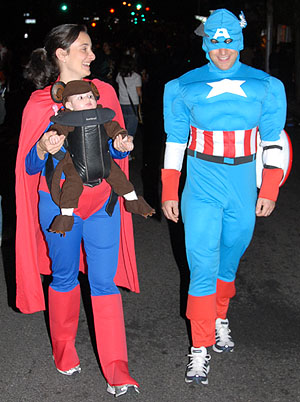 Halloween is our green light to let it all hang out.  It’s the one holiday in America where inhibitions take their own separate holiday.  Of course, this doesn’t count Mardi Gras in New Orleans, that’s another beast altogether.

Americans are so pent-up most of the time from our inherited Puritan values, that I believe we’ve come to need this holiday more than any of the others.  Sure, at Christmas, we exchange gifts and talk about loving one another in that Christmas spirit.  But show me another holiday where it’s accepted practice to scare the bejesus out of someone?  That’s the gift that keeps on giving.

I vote Halloween as America’s most sacred holiday.  It’s probably the only one that doesn’t honor a single person or actual event in our history.  It exists simply to exist, a holiday that is fun for its own sake.  And sometimes, that’s exactly what we need.