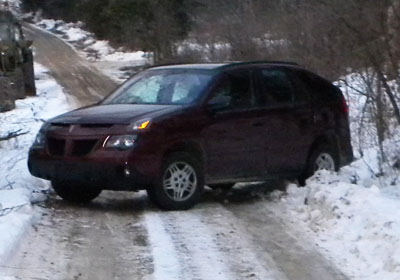 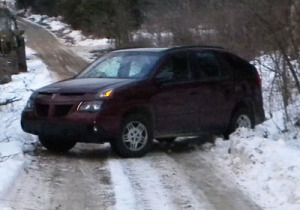 My only regret, Front Wheel Drive.

In 2001, when the Pontiac Aztek first came out, it was reviled as one of the ugliest cars ever made.  At the auto show where it was released, the GM executives even apologized for its look.

A poll in Britain’s Daily Telegraph newspaper in August 2008 placed the Aztek at No. 1 of the “100 Ugliest Cars” of all time.  In 2007, TIME magazine called the Aztek one of the worst cars of all time.

Oddly enough, in 2001, the Aztek won the J.D. Power & Associates award for “Most Appealing Entry Sport Utility Vehicle”.  They noted that “The Aztek scores highest or second highest in every APEAL component measure except exterior styling.”

How does one vehicle create so much attention and controversy?  Find any site that’s bashing the Aztek and chances are, if they allow comments, 90% of the comments will be from very happy owners.

In 2001, the Aztek was christened a “crossover” vehicle, a cross between a car and an SUV.  It was GM’s first foray into the new market of crossovers, a market that hadn’t yet been discovered, a market that was aimed entirely at Generation X’ers.  It was also one of the first “boxy” vehicles sold since the “smoother is better” mantra was first uttered during the eighties.

What GM did with the Aztek was forge the path for all the successful crossovers to come later, sporting the same boxy look.  The Toy0ta RAV4.  The Honda CR-V and Element.  The Scion xB “Toaster.”  The Nissan Extera and Cube.  All of these crossovers are marketed to the young twenty- and thirty-somethings “on the go.”

So was the Pontiac Aztek.

Only the Aztek was ahead of its time.  It created the crossover industry without reaping any of the rewards.

The Aztek’s tagline was, “Quite possibly the most versatile vehicle on the planet.”  And let me tell you, they weren’t kidding.  My Aztek is the most versatile car/truck I’ve ever owned.  The rear seats fold forward and up to create a huge cargo space.  The center console removes and doubles as a cooler.  The back door splits in two, the top half lifting up and the bottom half folding down and outward, with 2 butt impressions and drink holder built in, perfect for tailgating.  If you remember the commercials way back when, there’s even a tent designed to fit perfectly at the rear of the vehicle.

It’s great on gas mileage, has the turning radius of a car and has the windshield vision of an SUV

Matthew DeBord of The Big Money argued in November, 2009, that despite its poor reviews and sales, the Aztek is the car that, in the long run, could save GM. He praises GM for being daring and trying to create an entirely new market in vehicles, rather than simply copying successful formulas. He argues that the Aztek’s failure is similar to the failure of the Apple’s Newton and Mac Portable – two failed products that revolutionized the computer industry and became the basis for later successful products made by Apple.  http://www.thebigmoney.com/articles/judgments/2009/11/17/montezuma-s-aztek-revenge

I agree with DeBord.

With the Pontiac Aztek, GM blazed a new trail in American innovation, a function the crossover was originally meant to do.  It’s just too bad that the Aztek couldn’t be around to see how well-traveled that very road is now.