The Price Of Insanity

I was telling a friend last night about a movie I'd just seen on IFC, Intacto. It's an amazing foreign film that's totally refreshing and brilliant, especially after being bombarded with a steady barage of predictable Hollywood films. I didn't want to ruin it for him so I just told him of the opening scene and how it began like the movie, The Cooler. The similarity ends after five minutes, and although both movies are good, Intacto was spectacular and cinematic.

When I told him the movie's central theme was luck and the games lucky people play, he interrupted me. He told me the story of his cousin who had a cushy job in the corporate world making six figures. He had it made and after a weekend of playing internet poker, he quit his job. In a few short days, he'd cleared sixty thousand and decided he could do that for a living. 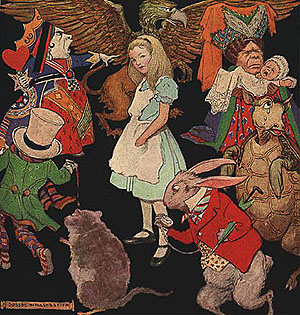 Alice In Wonderland, Choosing Her Insanity.

His whole family told him he was crazy, insane even.  He'd lost it, giving up a sweet job making mega-bucks to become a professional gambler.  But he'd always played poker, for fun and for small stakes, and he was pretty good at it.  He had a system.  And more importantly, he won more than he lost.

Now, here's a man with a family and obligations who gives up a steady well-paying job to spend his days gambling.  Sounds crazy, right?  But let's look at this differently.  Don't we gamble every day in some way or another?  Isn't riding a bus or hopping a subway or driving a car somewhat of a risk?  And nowadays, isn't working for a corporation a form of gambling?  Business can change at any moment and any number of people above you on the totem pole can make you and your job redundant.

Is this guy crazy for giving up a "sure bet" to gamble for a living?  He loves to play poker and from what I understand, his job left more than a little to be desired, except for the money.  With my unscientific calculations, we spend around 40% of our waking lives working a 40-hour a week job.  Most of us don't really care for our job, but if you don't like it, why do you do it?  For the money?  Well, isn't that what this guy was able to do without putting the 40 hours into a crappy job to get it?

He shifted where he spent his time to something he loved doing and not only is he making more of that money stuff, he's having more fun doing it.  Isn't that what we all strive for?

I ask you, which situation is more insane?  Spending 40% of your waking life doing something you don't care about (which is essentially wasting your time) or spending that same time on a pursuit you love?  Who's paying the price of insanity here?  The drones living safe mundane lives or the adventurers following their dreams?

Think about it.  What is your passion?  Can it pay your bills?  Are you willing to take the chance to achieve your dreams when your family and friends will label you insane?  Step in the light and join us crazies.  But I warn you, you'll never see the world the same again.

Tell me, which pill shall you swallow, Alice?