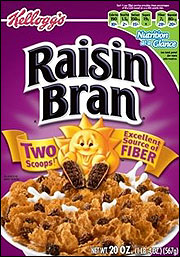 I’m 36.  I’ve been in love more than once and I’ve done my fair share of traveling.  I’ve been to Disney World, I’ve seen the Grand Canyon, and I’ve partied in Time Square.  I’m 36 and I just had my first bowl of Raisin Bran.

Now I’m the first to admit I grew up sheltered from a lot of different cultures.  The nearest neighbor was a quarter mile away and we got only four TV channels.  Five on a clear night.  I didn’t have cable until my sophomore year in college.

I was eighteen when I ate my first bagel, nineteen before I went to my first Mexican restaurant, twenty when I visited an Indian restaurant.  At eighteen, I took my first ride in a an airplane (A VW bug with wings) and at twenty-three I flew in a real aircraft (a 747 maybe?).

It was the day before my driving test in driver’s education (age: 15 1/2) when I first sat behind the wheel of a car all by myself.  I drove up and down the driveway.  I was exhilarated beyond belief.

It may seem that I led a completely sheltered life but there were plenty of things I did.  I solved my first Rubik’s cube when I was nine.  I wrote my first computer program at twelve and my first computer game (A Wheel of Fortune knockoff) a year later.  I played organized sports every year I can remember and visited the oceans and the mountains from my earliest memories.  I even saw my first set of real boobs before age ten and lost my virginity at sixteen.

I’ve made beer, had a Mercedes, DJ’ed on the radio, owned my own business and lost it.  I’ve even been married and divorced twice.  I can bake a helluva cake, hang wallpaper, balance my books, play an instrument, lay ceramic tile, and install a ceiling fan.

I’ve done a lot in my relatively short life and I’ve got plenty more to do.  My first bowl of Raisin Bran is just the first step.  Next … Corn Flakes with bananas … making cheese … then maybe publishing a book.