I laughed when she first said it.  I thought she was making a joke.  But there's one thing you learn about my Mom, she doesn't joke about shopping.  That's serious stuff.  Don't get me wrong, I'm not making fun of her, she's amazing at finding deals and buying you that perfect present at Christmas.  She puts so much thought and care into selecting just the right item for the right occassion.  She's very good at it.

A Six Dollar Store in Dallas.

Nevertheless, when she told me she found a six dollar store, I was taken aback. I'd never heard of such a thing. Didn't know it existed. I mean, it's entirely possible that it could exist and I not know about it. All the ingredients are there. It's only five away from the traditional dollar store, it was only a matter of time. But what about those items that got skipped in the hurry to get there?

Where's the two dollar pack of 80 grit sandpaper end up? Where's the three dollar cobalt vase supposed to go? What about the four dollar heavy duty flashlight? The five dollar valance with bears and balloons on it? As a consumer, I don't have a store for them other than your traditional super-mega-stores. Where's my specialty store?

I guess the real question is, "Why six dollars?" When did six dollars become a special amount? I could understand five. I mean, come on, five dollars? Betcha five bucks the Packers will win. Gotta five? Five and dime? Okay, that's actually a nickel but you get the idea. Five is a magical number when it comes to money. Hell, there's even a five dollar bill!!

But six? Why six? Here's my theory, the owner was setting up a five dollar store, possibly named "The Five and Find" But the profit margin wasn't big enough. He noticed that he'd be out of business within the first year and decided to grab an extra dollar on everything. Hence, the six dollar store.

Or maybe there was a misprint at the sign company. His 5 looked like a 6 because he was up all night drinking when he thought of the idea and wrote it down. Then he couldn't remember and went with the six dollar store just to save face around his buddies.

Or, for some reason, there just weren't enough crappy things he could sell for five dollars. Once he looked at the retail six dollar catalog, there was so much more inventory available he went there instead of five.

I could understand skipping two, three and four. But five? Five is a great number to have around. It's easy to count by fives. All the bills above fives can be divided by five. Six? Not a single bill is divisible by six. Can you imagine the room you'd save by not having to carry ones in your cash register? You'd only have to stock fives, tens and twenties. But in a six dollar store, you'd have to have all those annoying ones. 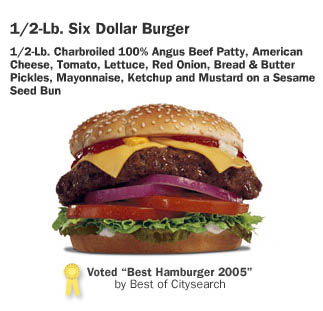 Here's a $6 Store but they actually charge $6.88. Talk about a screwed up setup. Must be because of tax but I still don't get it, no tax figure gets you to a nice even number. Except 9% tax, and every item is $7.50. I guess that's what they were shooting for?

Then there's the Six dollar burger offered up by Hardees. Huge.

And the Pix for Six.com website that sells stock photography for six bucks. A startup.

There's really no point to all this ranting, I probably had one when I started but it seems to have gotten lost in the foray. When I finally stopped laughing at my Mom's excitement over the six dollar store, she just smiled and said, "That shirt you're wearing is from there."

"It's from the six dollar store."

And there you go. She bought me a beautiful new sky blue golf shirt the other day and surprised me with it for no reason. Now I know why. She gave it to me because she got it for only six bucks. All hail the six dollar store!