I've been married twice, to two completely different women.  Number One was 5-5, long blond hair, green eyes, curvy, smart, from West Palm Beach with a strong Catholic upbringing and strict parents that made you instantly want to save her.  When she finally escaped their grasp by moving all the way to North Carolina from Florida for college, she went wild.  Well, she didn't have to hide it any more anyway.  The repressed girl beneath that prim Catholic exterior emerged holding a fifth of Vodka and an attitude ready to take on the world.  Then she met me and well, we got married 6 years later.

Number Two was 5-9, long auburn hair, freckles, hazel/brown eyes (we had a fight over this once), a couple Masters degrees, from North Carolina a couple generations off the boat from Poland (she still calls her granny Babushka).  She'd already been married once and was a trauma counselor so she had all sorts of ideas and theories on everything relational.  And well, I'm a guy. 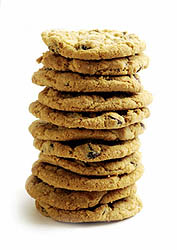 Just about the only thing they had in common was a very strong-willed independence.  This is a good thing because that's what I'm attracted to.  This is also a bad thing, because they both divorced me.  Oh well, c'est la vie, non?

I tell you all this background because in the second marriage, we both cooked.  In the first, I was the chef, which I didn't mind because I love cooking.  It impresses the chicks, ya know?  And I'm not talking about throwing a coupla steaks on the grill, I'm talking about whipping up some creamy garlic shrimp linguine from scratch, making the white sauce from butter, flour, milk, cheese and spices.  Yum.

One day, back when I was with Number One, I entered the kitchen to find a great big surprise.  Wife Number One had whipped up a batch of one of my favorites, homemade Oatmeal Cookies.  They were still sitting in the pan, right out of the oven, and she stood beside them beaming with boundless pride.  Just like in a bad sitcom, flour was all over the kitchen, sugar granules and oatmeal and baking powder were spilled on the counter.  Mixing bowls were piled in the sink and she had her beautiful blonde hair up in a sexy little ponytail, some white powdery substance smudged on her face.  She was so elated, she'd baked for me from scratch for the first time.  And I was so proud of her, she'd done good.

We cleaned up the mess while we waited for the cookies to cool, I was as excited about those cookies as Santa would've been.  We finally scooped them onto a platter she'd laid out earlier and she gave me the honors.

I don't know how to tell you this, but they were absolutely awful.  She took her first bite the moment after I did and we both looked at each other.  Neither of us wanted to say the obvious, neither wanted to admit that all that time and effort she'd so lovingly put in had been wasted.  Totally wasted.  Extremely totally wasted.

When I tell you those cookies were bad, it's the understatement of the century.

She'd used the correct recipe, right from the book I'd used to make them many times before.  I checked.  Cookies aren't that tough to make and she was absolutely perplexed where she went wrong.  I was too, then I noticed their consistency.  They seemed to fall apart in my mouth without melting like a real cookie should do.  They were still warm from the oven and should have almost dissolved into a sweet sugary mass of oatmeal, bursting with wholesome flavor.  But it was not to be.

There's a little-known secret us chefs know that the rest of the world may have trouble with.  When the recipe calls for 2 cups of flour, add two cups of flour.  Because it is almost guaranteed that if you accidentally substitute 2 cups of cornmeal for that flour, your recipe will fail miserably.