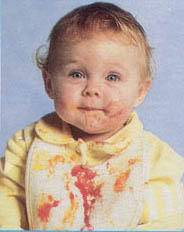 I have a legitimate question.  Why can’t food stains be pretty?  One day, you’re sitting there minding your own business, eating a perfectly good chili burger and when you bring it up to your mouth … sloosh, chili all over your shirt.  And not just chili, it’s accompanied by some mustard and ketchup in too.  Suddenly, on what was going to be a pretty good day because you had this huge chili burger in front of you, it turns to crap just because the chili soaked through the bun and collapsed it, causing a three car pileup on your chest.

Now, why are all food stains red or orange or yellow?  These never look good on a shirt and chances are, the shirt is ruined.  Those stains don’t come out easily and even if they do with some wonder product from an infomercial, there’s always a ghost stain left behind.  Just enough of a stain so that when you wear it out on a date, the thought of it sits there in the back of your mind beside the “Do I have bad breath?” thought, bugging him, asking to be next on your mind.  Then you begin self-consciously looking at the shirt when you think your date’s not noticing, but they are, and now they think you’re a self-absorbed egocentric narcissist.  You have to always be looking at yourself.  Then the date’s ruined and he/she tells their friends what you’re like and you spend the next six months dateless and alone, with a stained shirt for company.  All because chili sloshed out of a burger.

I got one for you.  Why can’t we make messy food blue?  A blue food stain won’t look like a food stain at all.  It will look kind of avante garde, an artsy fartsy addition to a shirt that says “I read poetry in the candlelight” or “I am a feng shui expert in my spare time when I’m not raising funds for the art council.”  A blue food stain would solve all types of social problems.

For instance, let’s say you’re out for a night on the town with friends.  You’re chowing down on some Mexican, you go to dip some of the salsa with your chip and the chip is faulty, allowing some of the salsa to dribble out a hidden side rivulet.  The salsa lands just where you don’t want it to, on your left boob.  Disaster, right?  Everyone else will meet someone at the bar after dinner except you, you’ll be left for sloppy thirds and have to pick between the drunks that talk too much and the bar regulars who hang out expressly waiting for the schmucks who didn’t leave with anyone else.

But if the salsa is blue, this changes the whole situation.  A blue stain on your nice white blouse can be made into a stylistic flower by simply tracing around it in elongated semi-circles with a Sharpie marker.  Now it looks like a designer original and for all intensive purposes, it is.  Is there another one out there like it?  See the problem that just solved?  If you’re a guy and you’re wearing a nice golf shirt that just got stained blue, just simply borrow the Sharpie from the chick with the designer blouse and write a word underneath the splotch with a .com after it.  Now it’s a logo shirt and no one will know the wiser.  If someone checks the site on their wireless PDA because they’re so drunk and bored they have nothing else to do, just play it off.  “My brother gave this to me, I had no idea it was a transvestite site.”

Either way, your new shirt makes for great conversation and the problem is solved.  Instead of being left alone in the bar with the droolers and slurrers, you’ll end up in someone’s bed, waking up in the morning and trying to sneak out without them hearing you.  If everyone went to the store right now and invested in some blue food dye, the world would be a better place.  Things would run much smoother.  You could even make a business out of it.  And we could finally get Sunday morning TV back to westerns and karate flicks where it belongs.