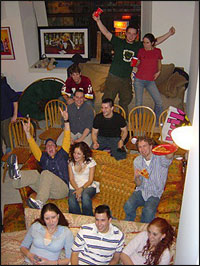 I went to a Super Bowl Party this past Sunday and saw a friend I hadn’t seen in almost ten years.  It was good to catch up on what had happened in our lives and even though we’ve emailed and stuff since we last saw each other, sometimes it takes that personal meeting to give you that feeling of real connection.

And you know what?  The dude is still as goofy as I remember.

This is a good thing.  We all have a certain goofiness that we reveal to our close friends and family.  Siblings, in particular, never let us forget the brain-headed things we did growing up.  And they never hesitate to inform future wives of those times too.

Craig’s Super Bowl Party had everything a Super Bowl Party should:  hot wings, chili, chicken enchilada soup, beer, soda, banana pudding, plenty of smack talk, a projection TV, etc.  It had plenty of different people from all walks of his life and they all mixed well.  There were even some hot chicks there (all married as my luck would have it).

There was a single misfit, however, and I guess every Super Bowl Party had one.

She showed up late and all through the game (and even the commercials), she asked what “that meant” and “why did the ref blow the whistle” and “why can’t he do that?”

She was a chick at a Super Bowl Party who didn’t have a clue about football.  For some reason, her husband didn’t come with her.  It’s my personal belief that he feigned sickness to get rid of her so he could watch the game in peace.

Now, I know what you’re saying.  Stop being mean.

But this chick was the kind of chick that said everything wrong and didn’t “get it.”  I’ve always said I divide the world into two types of people:  people who get it, and people who don’t.  And once you’ve taken one fork in the road,  you can’t switch.  Because really, you either get it, or you don’t.

This chick didn’t get it.

I sort of feel sorry for these people and I usually try to ease them into a situation but then I become “The Idiot Magnet.”  And that’s something I’ve always wanted to change about myself.  Sometimes I’m too nice and I go out of my way to make other people comfortable.

These misfits of society really want to “get it.”  They usually try hard to “get it.”  But the point of “getting it” is that you don’t have to try to begin with.  You just understand.  Know what I’m saying?

Do you get it?