WWJD: I Bet Jesus Could Dunk

If Jesus came back today, I bet he could dunk a basketball.  With that whole water-to-wine, healing-the-blind, walking-on-water thing, you know dunking would be a walk in the park.  Think about it, Jesus would be one helluva basketball player.

Who wouldn't pick Jesus first on their team?  With that son-of-God gig, he's pretty much guaranteed to be the number one draft pick.  Would you like to be known as the guy who didn't pick Jesus?  Might as well have stoned him.

Can you imagine him playing Jordan one-on-one?  Michael would look like a fat girl in heels playing against Jesus. 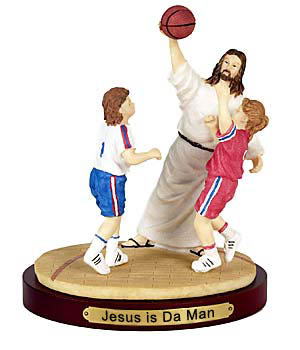 Jesus Teaching How To Dunk.

And who would foul Jesus?  Who in their right mind would take a chance on not going to Heaven?

Dream match:  Jesus vs. Beelzebub.  Imagine the marquee … God's Son versus God's Archenemy.  Talk about selling out the Garden.  Who wouldn't want to see that?

Of course, Beelzebub would cheat.  He'd commit some cheap fouls here and there.  And he'd own the refs, cause everybody knows they're all going to hell anyway.  "Just look the other way and I can offer you Paris Hilton for eternity.  I can probably get you Britney, too."

Couldn't you visualize it?  Jesus wearing the white uniforms, the number One sewn on the back, his long wavy hair pulled back in a ponytail, beard cropped close, maybe a knee brace or two where he never completely recovered from that crucifix thing.  He might struggle at first as he got used to Bee's cheating.  He'd find a way to overcome the adversity with love and all.  Mercy and the like.  It would be tough.

But Jesus would eventually win, because the fate of the world would once again be upon his back.  And this time, he's destined to win.

But here's the big question.  Judging from all we know about his personality from all the writings on his life, would he dunk with one hand or two?

Two is harder, much harder.  You got to have some major ups to dunk with two hands.  The Bible never said anything about Jesus' jumping ability.  Sure he walked on water but what was his vertical leap?  Could he outjump Vince Carter?  How about David Thompson in his prime?

Jesus could do a lot of things, but he was still subject to the law of gravity.  Right?  I mean, he never pulled a RoadRunner and walked off a cliff, suspending himself in mid-air.  Did he?

And tell me this … has there ever been a good Jewish basketball player?  They own the teams, they don't play on them.

But then again, we're talking about Jesus here.  THE Son of God.  If there would ever be a Jewish basketball star, it would have to be Jesus.  Hands down.

I think that Jesus would dunk with only one hand, not because he couldn't with two, but because he's not a showboat.  He'd maybe fake to the left to get Bee off-balance, then zip past him with a sweet cross-over, thread around him just missing his pointed tail, elevate, and dunk it home solidly with one hand.  Nothing fancy.  Nothing stupendous.  But two points nonetheless.

Oh sure, I bet he could shoot a wicked three-pointer.  But that's kinda boring.  From what I can gather, Jesus was an entertainer of sorts.  He did perform miracles, you know.  Then there's that whole speech on the temple steps, that was pretty ballsy.

I think he'd be a pretty good team player, too.  Look at all the disciples he had.  He had a team already, thirteen of the baddest Jews the world could hope for.  Even had a girl disciple, very progressive for his time.  He was Title 9 compliant before there was a Title 9.

Yeah, if I was a betting man, I'd say Jesus could throw down a pretty mean dunk.  And if he had the right encouragement, I'm pretty sure he could pull off a 360 between the legs with a blindfold.