WWJD: What If Jesus Had Married?

Let's pretend for a moment that history was different, or that Dan Brown and the conspiracy theorists were right.  Let's play with the idea that Jesus married Mary Magdelene.  All you zealots out there go ahead and grab your stones and prepare to get biblical on me.

Can you imagine Jesus and Mary dating?  Mary Magdelene talking to her girlfriends, saying, "Guess who just asked me out?  The son of God.  No, really.  He did.  I swear to God … oops."  Nobody'd believe her, they'd think she was loony. 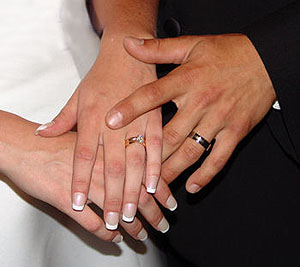 Were Jesus and Mary Magdelene Married?

What about their first kiss?  Can you fathom the pressure on Jesus?  He's the son of God, he can perform miracles, walk on water, feed a thousand people … if this first kiss is anything short of orgasmic, she'll be disappointed.  She'd better see stars and lightning and feel the Earth open up and swallow a few heathen nations.

Fast forward to the wedding night.  Do I really need to go into this?  I could touch on all sorts of taboo topics here.  I'll just say two words:  size issue.

Can you picture being Jesus' son?  Talk about being held up to an unreachable standard.  You gotta get straight A's in school.  You gotta forgive everyone who crosses you.  And you can't ever curse.  Not even under your breath because Grandpa would hear you no matter what.

I don't really have anywhere I'm going with this, I just think this stuff's funny.  Can't you just see Mary Magdelene on the brink of orgasm, thinking, "No, no … a little to the left, honey.  That's almost it.  Almost …"  You can't exactly tell Jesus he's doing it wrong, can you?

And what would they argue about?  Jesus being too damned pious?  Jesus spending all his time saving the world?  Jesus not doing the laundry?  Could he even admit to ever being wrong?  Because trust me, when you're married to a woman, you're wrong more times than you're right.

I guess I could go on and on citing you funny examples of their life together.  Mary asking, "Did you pick up the milk on the way home like I wanted?"  Jesus saying, "Yep, sure did, here you go."  Mary tasting it, making a sour face, saying, "Jesus!  You turned it to wine again!"  Jesus holding his head down, saying, "Sorry, I got us some fish too."  Mary saying, "Fish, again?  You got fish again?"  Jesus shuffling his feet, coming back with, "Hey, it's what I do.  If you wanted bread and water, you shoulda married John the Baptist."

Want some more?  I got a million of 'em.

Mary saying to Jesus, "Honey, will you mow the lawn today?  And when you do, don't be calling up a bunch of locusts to do it.  Last time they wiped out all my tomatoes and cucumbers."

Okay, I guess you've had enough.  Have a great day, hope I gave you a few smiles, maybe even a few laughs.