The property management place where I work is moving offices and I was put in charge of coordinating all the utilities and services migration.  In other words, I had to call BellSouth (now AT&T), Time Warner, etc. and schedule dates for transfer of services, change of address and all that other fun stuff.  We were tentatively scheduled to move last Friday the 13th, already a bad omen as it was.  But I noticed that in no way would our new office space be anywhere near through so I convinced the boss to push it to this Friday, tomorrow, the 20th.

I called BellSouth and had no problems scheduling the phone service to be moved.  I then called a phone guy, got him out here same day to look at our phone system and within another work day, he had the new place wired and ready to go.  On moving day, he'll simply take the old system out of here, drill it to the wall over there, and wire it in.  No problem, right? 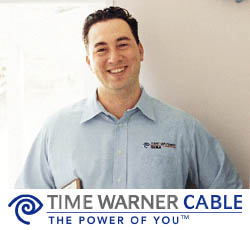 Then I call Time Warner, cause that's who we have internet service through.  When I first called on the 6th to have it moved on the 13th, that was a no-go.  Time Warner's phones were down when I tried to call.  All day.  A fast busy signal was all I got.  What fun.  So I put it off and called on Saturday.  Same problem, no phone service.  No, I'm lying, I got through once and went into their Audix system and it was asking me for a voicemail passcode like I was an employee.  I finally submitted my transfer online at timewarnercable.com.

I got a phone call on Monday morning.  Because it was a new build, the address didn't exist in the county database.  They told me they would have to send someone out to verify that the address existed and that they could run service to it.  This would take 7-10 working days.  In other words, 2 weeks to prove the new place didn't exist only in fantasyland.

This is good business practice.  Otherwise, you'd have elves and gnomes prank calling Time Warner all the time.  "Uh, yes, Time Warner?  Yeah, I'd like to have my service moved to 1234 Candy Cane Lane.  Yeah, sure, I'll hold."

Okay, this is about the time I realize that we're in trouble and I should move the "move" date to the 20th.  So I call Time Warner back, only to get a fast busy signal.  Still no phones.  They had called me but I couldn't call them.  Sound familiar?  Reminds me of my teenage years and dating except for that whole them-calling-me thing.

I go to the website and resubmit a new work order, carefully explaining that I needed service moved on the 20th now instead of the 13th.  And I came up with a brilliant idea.  Just in case it takes them forever to do the inspection of the new property, I got the notion to have them switch service to an already existing apartment next door so the address existed, and the service could be turned on that day.  We have a wireless router so I could hook up the cable modem in that vacant unit and the signal would reach the new office.  We could do this until the *new* new service was installed at our *new* place.

Genius, right?  What a quick thinker I am?  Pat me on the back and gimme a lollipop, yes?

That was, until Time Warner disconnected our internet service completely yesterday around 11 am.  On the 18th, two days early.  Even now, I'm writing this not knowing exactly when I'll get it up.  (hehe, I said get it up).